Shane Long strengthened his case for inclusion in Mick McCarthy's Republic of Ireland side for the crucial Euro 2020 play-off with Slovakia as he helped Southampton to a 2-0 defeat of Aston Villa.

Ireland Under-19 midfielder Will Smallbone made his Premier League debut for the Saints on a good day all round for them. It was another big step forward for Smallbone, who scored in the FA Cup win against Huddersfield back in January.

Villa's relegation fears deepened however after Long and Stuart Armstrong condemned them to defeat at St Mary's.

Dean Smith's side did not muster a single shot on target in a dismal display which will set more alarm bells ringing in the west midlands.

Long's eighth-minute strike and Armstrong's stoppage-time break-away, after Pepe Reina had gone up for a corner, eased a Saints side who not so long ago looked relegation-bound themselves to the relative safety of 34 points.

Villa, however, remain just a point above the drop zone and could well be back in it after the weekend. 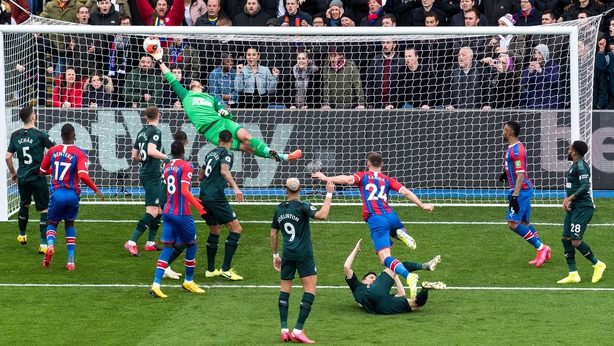 Crystal Palace broke a three-match losing streak league as full back Patrick van Aanholt scored from a free-kick to give Roy Hodgson's side a 1-0 home win over Newcastle United.

It was also Palace's first win of the year and their first since a 2-1 victory over West Ham United on St Stephen's Day, ending a run of eight games without a win in all competitions.

Newcastle goalkeeper Martin Dubravka denied Palace twice in the early stages from corners, flinging himself to his right to claw out a Gary Cahill header before denying Scott Dann in a similar fashion.

However, the Slovak goalkeeper found himself wrong-footed when Van Aanholt stepped up at the stroke of half-time and fired a free kick past his outstretched arm and into the net.

Newcastle were reduced to 10 men in stoppage time when Valentino Lazaro dragged back Wilfried Zaha to prevent the winger from going one-on-one with Dubravka and the Austrian walked off the pitch even before the card was produced.

The result allowed Palace to leapfrog a toothless Newcastle, who had only two shots on target, and move up to 13th in the standings with 33 points - two points ahead. 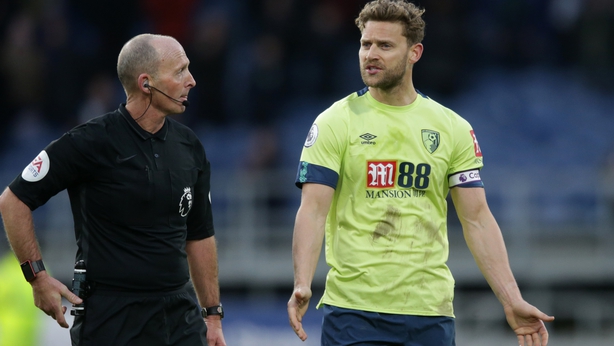 Burnley moved up to eighth with a 3-0 win over struggling Bournemouth thanks to goals from Matej Vydra, Jay Rodriguez with a penalty and Dwight McNeil in a game which saw a dramatic turnaround due to VAR.

There was early use of the review when Bournemouth had a Josh King effort in the 22th minute chalked off after VAR ruled that the ball had struck Philip Billing's arm in the approach.

Burnley grabbed the lead in the 53rd minute with Czech striker Vydra claiming his second goal in as many games with a cool finish after being slipped through by McNeil.

But the game was to turn on a remarkable minute of VAR reviewed action on the hour mark.

Burnley appealed in vain for a penalty, arguing that Adam Smith had handled a McNeil cross - the resulting counter-attack ended with Callum Wilson feeding Harry Wilson who clipped past Nick Pope.

But VAR ruled that Smith had indeed handled - cancelling out the Bournemouth goal and awarding Burnley a penalty which Rodriguez converted to make it 2-0 after 61 minutes when moments earlier the score had stood at 1-1.

Vydra and Rodriguez went close to adding a third for Burnley as did McNeil who hit the post with a beautiful curling effort before rounding off the win with a superb solo goal in the 87th.