Two first-half goals saw St Patrick's Athletic pick up their first points of the season against a rudderless Sligo Rovers at the Showgrounds.

Ronan Hale handed Pat’s the advantage on 26 minutes, while Chris Forrester doubled the lead on 36 for a Saints side who finished the game with ten men. Oliver Younger was dismissed for a second yellow card mid-way through the second period.

Having made four changes from their opening night defeat to Waterford, it was the visitors who threatened first.

Sligo did cause the Saints one or two early moments of worry, but once Pat’s settled, they were in control.

Hale saw his improvised effort take a touch off a Rovers defender after he hooked the ball goalwards from the left. This heralded some stiff pressure from Stephen O’Donnell’s side who hit the lead on 26 minutes.

Darragh Noone’s loose pass was pounced upon by Hale who unleashed a stunning drive from 20 yards past Ed McGinty.

Forrester was off target with an audacious effort from a set piece from a similar range on the half hour.

He was involved again on 35 minutes as Sligo heads continued to hang. 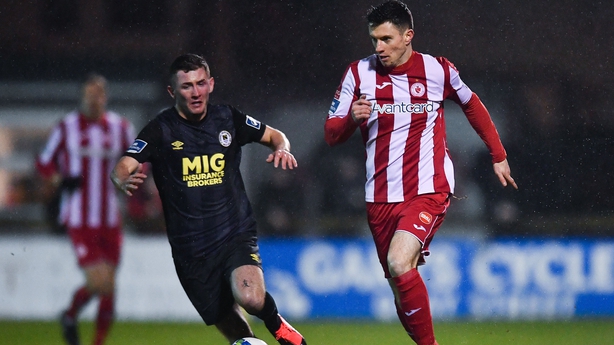 The attacker muscling Niall Morahan off the ball before linking up with James Doona who was denied by McGinty. The goalkeeper grabbing the ball from the feet of Doona as he prepared to shoot.

The Dubliners doubled their advantage nine minutes from the break.

Recent recruits Robbie Benson and Billy King were involved on the left as the latter found Forrester, who seized the opportunity, picking out the bottom corner on the turn from ten yards.

Pat’s almost had their third four minutes into the second half. A lapse in concentration from Kyle Callan-McFadden allowed King the chance to finish from close range. McGinty sparing his team-mate’s blushes as he spread himself, getting a stud to King’s placed attempt.

Forrester was next to go close just before the hour. McGinty scrambling to keep hold of the former Aberdeen man’s attempted lob as Pat’s looked to put this game to bed early on.

The home support were offered a glimmer of hope when Pat’s were reduced to ten on 68. Younger shown his second yellow after he tangled with substitute Jesse Devers.

The numerical advantage didn’t pay off however as the Inchicore side saw out the remainder of the game without much fuss. There was a late chance for Devers, but the Mayo man couldn’t come up with the touch he needed to half the deficit.