Super-sub' Adam Liddle broke Finn Harps' hearts as Derry City were fortunate to claim a point from the first North-West derby of the season.

The Brandywell men, never really got a proper grab of things and got out of jail thanks to Liddle's 95th minute strike, which had cancelled out Ryan Connolly’s first half goal.

As expected Barry McNamee’s first touch for Harps was booed by the home side supporters, as both sides looked to get a proper foothold in the encounter and acclimatise to the terrible windy conditions.

Derry had the best chance of the opening quarter and really should have done better as the ball fell perfectly for Walter Figueira, but with Harps keeper Mark McGinley to beat, the ex-Waterford man blasted well over the bar from just inside the box.

A defensive mistake from Ciaran Coll resulted in Harps breaking the deadlock on 33 minutes.

The Derry left-back's pass fell perfectly to Ryan Connolly and the ex-Shamrock Rovers man gleefully curled the ball home from the edge of the box, after City keeper Peter Cherrie seemed to give up the ghost with the effort.

Harps started the second half creating the first chance on 53 minutes when on the counter attack Tony McNamee released Karl O’Sullivan, but the striker’s well hit drive had to be parried away by a fully stretched Cherrie. 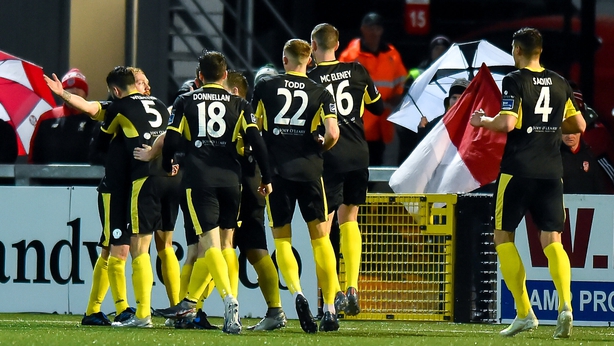 On 69 minutes Derry went close again to leveling things as substitute Stephen Mallon got in behind the Harps defence but his right footed strike was superbly blocked by a diving Shane McEleney, who injured himself in the process and was replaced by Mark Coyle.

In the closing stages that man O’Sullivan went close when he ran at the Derry back-line, before seeing his 20 yard strike easily saved by Cherrie.

With virtually the last kick of the game Derry equalised as superb skill by Figueira ended with the winger’s right wing cut-back find Liddle, who gleefully turned the ball home from close range.