Wolves boss Nuno Espirito Santo has told his charges to keep dreaming of Europa League glory after their crushing 4-0 win over Espanyol.

Diogo Jota's hat-trick - his second in two European games - and Ruben Neves' rocket put Wolves on the brink of the last 16.

They go to Barcelona with a commanding lead for next Thursday's second leg.

Nuno has taken Wolves from the Sky Bet Championship to the Premier League and last 32 of the Europa League and feels supporters are entitled to keep believing.

He said: "They know me, now we have to recover, rest because we play on Sunday. Then we can think about other things but dreaming is for free.

"The tie is not over, now we have a couple of days to play Norwich (on Sunday), we have to rest, recover and compete well on Sunday.

"Then we can think about the second leg. Football is never over." 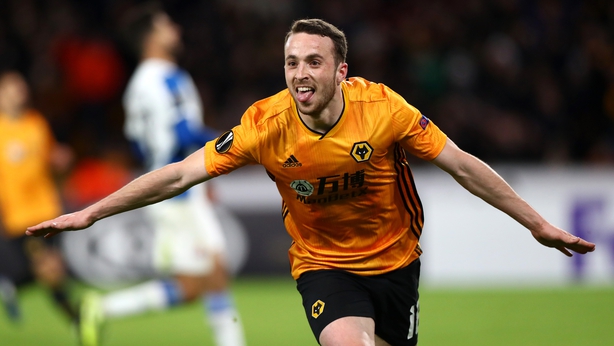 Jota, who scored a hat-trick in Wolves' final group game against Besiktas in December, opened the scoring after 15 minutes when his volley found the corner after clipping Victor Sanchez.

But the hosts powered away when Neves unleashed a sensational 25-yard volley seven minutes after the break.

Jota made it 3-0 and Pedro Neto hit a post before Jota completed his hat-trick, drilling the ball into the bottom corner from 18 yards with nine minutes left.

"I'm happy for him, delighted because when a player scores three goals it means he has helped a lot," Nuno added.

"He did a good job, not only offensively but covering and was always organised. Neves also scored a beautiful goal.

"We competed well, the result is the consequences of what we did. We were clinical and that's what we want. Sometimes you create more and don't score.

"It's another clean sheet, defensively we did really well and everything starts from there."

Espanyol are bottom of LaLiga having finished seventh last term and boss Abelardo Fernandez made nine changes as he prioritised their survival fight.

"Maybe 4-0 was a bit of an excessive scoreline, it didn't tell the truth behind the game.

"Wolves were clinical and we were not as clinical as them. The second goal killed us off and for the third and fourth we weren't quite at it enough.

"I'm not going to criticise players for the performance tonight. Looking at the tie you have to say it's difficult to come back from 4-0."