Ianis Hagi delighted both his watching father Gheorghe and the Ibrox faithful as his double sent Rangers to a breathless 3-2 Europa League comeback victory over Braga.

On a wild night in Glasgow, with the Ibrox pitch again in a terrible state, it appeared Gers were set to slip up as the Portuguese visitors grabbed a two-goal lead.

But Rangers refused to lie down as they hit back to preserve Steven Gerrard's 15-game unbeaten home run in Europe as Light Blues boss and take a major step towards the last 16.

Hagi got the fightback started as he reduced the deficit before playing a part in Joe Aribo's equaliser.

And the Romania insternational then had his dad - former Real Madrid and Barcelona great Gheorghe - cheering from his seat in the Ibrox directors' box along with the rest of the jubilant Gers faithful as his late deflected free-kick crept into the net to seal a narrow victory.

However, Gerrard's team will have to rely on-loan Hibernian striker Florian Kamberi to spearhead their attack in the second leg after Alfredo Morelos was booked, meaning he is ruled him out of next Wednesday's trip to Portugal. 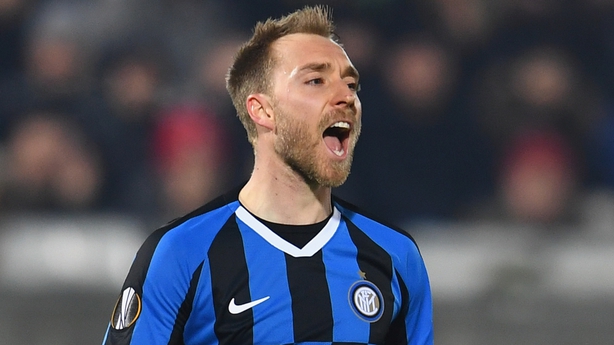 Daichi Kamada scored a hat-trick as Eintracht Frankfurt took a massive step towards a place in the last 16 with a comfortable 4-1 victory over Red Bull Salzburg. Filip Kostic added a fourth goal before Hee-Chan Hwang's late penalty gave the visitors a glimmer of hope.

Goals from Deyverson and substitute Kenedy gave Getafe a 2-0 win over Ajax, while Inter Milan won by the same scoreline at Ludogorets thanks to a 71st-minute strike from Christian Eriksen and last-minute penalty from Romelu Lukaku.

All three goals came in a 16-minute spell in the second half as Shakhtar Donetsk edged Benfica 2-1, while Sporting Lisbon defeated Istanbul Basaksehir 3-1 and CFR Cluj drew 1-1 at home to Sevilla.

Isaac Thelin converted a penalty to give Malmo the lead at Wolfsburg, but also scored an own goal as the Bundesliga side won 2-1, while AZ Alkmaar and LASK drew 1-1.