These clubs head into tonight's north-west derby after a mixed opening weekend.

Derry went to defending champions Dundalk and frustrated them for nearly 80 minutes, before conceding from a set piece and losing 1-0.

Finn Harps had a good home win against Sligo in a pretty forgettable game, but Ollie Horgan knows how tight things could be at the bottom.

They were three crucial points, and it will send Harps east in confident mood as they seek to nullify City.

Derry City: Derry have no fresh concerns for the visit of Harps.

Finn Harps: Harps will be without Mark Timlin, who is out for the season with a cruciate injury. Raf Cretaro is a doubt, loanee Adrian Delap can't play against his home club.

Declan Devine (Derry City manager): "The derby game will take care of itself," he told the Derry Journal. "They're a brilliant bunch of lads and the secret is to make sure we don’t lose two games on the spin this year. It’s key in this league. It doesn’t matter who you are playing, you’ve got to make sure if you lose a game you get back on the horse and make sure you don’t lose the next one."

Ollie Horgan (Finn Harps manager): "We've been turned over very comfortably there the last few times. We have a new team, it’s a huge game for us early in the season while we’re trying to take on a new approach, so we’ll see if perhaps its come a bit soon.

"We know what they have, it's just a matter if maybe we can dig in and deal with them. We'll go there in hope rather than expectation and see how we go."

Premier Division soccer returns to Tolka Park for the first time since 2013, and Shels will be looking to carry their form from last week, when they beat Cork, into this game.

Dundalk took a while to get going last Friday before Dane Massey got the breakthrough against Derry with just over 10 minutes to go.

It was the Lilywhites' first win on the opening day in three season, so Vinny Perth can only be satisfied as they prepare to head down the M1.

A reminder for those heading to the game that it is sold out - only those with tickets should turn up.

Shelbourne: Shels have no injury concerns.

Dundalk: John Mountney and Sean Murray both remain out through injury. Patrick McEleney and Georgie Kelly will undergo late fitness tests and be given every opportunity to be included in the squad, while new Serbian signing Stefan Colovic won't link up the squad on time.

Ian Morris (Shels manager): "We've been straight back down to it and working hard preparing for Dundalk, looking at ways of how we can beat them. It’s obviously a difficult game. They’ve been top of the pile for a number of years but there are ways of picking up results against them. We’ll look to nullify their threats and go up to the other end looking to score goals."

Greg Sloggett (Dundalk midfielder): "It was brilliant to get the first three points on the board last week against Derry City. It's a long season and it was important for us to get off to that start, we wanted to start winning early.

"I have played there (Tolka Park) a few times with UCD and it is always a difficult place to play, even the sides of the pitch are sloped, the crowd are on your back. They are a massive club and it is great to have them back in the Premier Division. We want to go there and win the game so hopefully we can continue our good start. "

Sligo Rovers were beaten last week in a dour clash against Finn Harps at Ballybofey, and Liam Buckley will hope that tonight marks the real beginning of their new season.

He welcomes his old club to the Showgrounds, but the Super Saints are also in search of points.

Stephen O'Donnell was only appointed last August, so supporters at Richmond Park will have reserved judgement on his performance last season.

The former Dundalk midfielder has brought in some really exciting players like Robbie Benson and Jason McClelland, so there's massive potential there.

Sligo Rovers: Danny Kane had a procedure on a foot problem on Monday and will not return until late next month at least while it heals. John Mahon (broken leg) and Regan Donelon (shoulder) also miss out, while Lewis Banks (muscle injury) is also unlikely to be available.

St Pats: Stephen O'Donnell has a clean bill of health.

Liam Buckey (Sligo manager): "I know my expectation of them and what they are capable of.

"It’s a lot different from what we saw last week, so I’m looking for them to go out and show it. Pat’s were beaten last week so they’ll be looking at this one certainly to get a result.

"We have to be at it from the start and we’ve had a good week of training to prepare for it. We were all disappointed last week and we’ll approach the game with a mindset to bounce back and get our season up and running."

Stephen O'Donnell (St Pat's manager): "We play Sligo, and then you're quickly moving into the other two games in the space of a week so it’s going to be a very busy schedule so it is important to get a good platform and a good structure within the week.

"It’s important to get a good training week in as there won’t be much training in between the games as there will be a lot of recovery after each game.

"It's always a tough place to go and you never get anything easy, but we are really looking forward to the game."

Alan Reynolds will have been delighted to pick up three points on the road last week.

Alan Cawley told RTÉ Sport in his season preview that the Munster men can finish in the top-four if things go their way, and last Friday's victory is the sort of result that would make you think he was right.

For Bohs, they had the sickener of a stoppage time goal against Shamrock Rovers at Dalymount on Satuday, but they picked up four points at the RSC last term, so Keith Long will be confident of getting the show on the road.

Waterford: Dean Walsh misses Friday's game due to a hamstring. Jack Larkin will also miss out, while Akin Odimayo is doubtful due to illness. Will Longbottom will be available after the former former Doncaster Rovers striker signed this week.

Bohemians: Andy Lyons is suspended, while Dinny Corcoran and James Talbot are doubts. There's better news for Keith Long with the return of Paddy Kirk after a suspension.

Alan Reynolds (Waterford manager): "Bohs are a top side. I've played in derby games and I know what it’s like to come out on the wrong end of a 1-0 defeat. They’ll be coming down here looking to make things right and put three points on the board.

"We’ve a good record against them since we came back to the premier. In eight games we’ve only lost once. The boys have all trained hard this week, and I’m sure they’ll be looking to extend that record against them and get our first home win of the season out of the way." 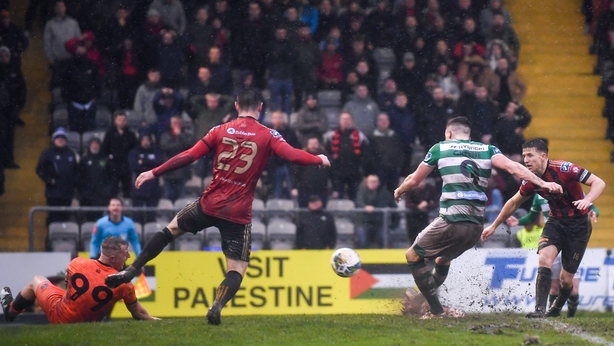 These clubs went in opposite directions last season as Rovers, along with a few others, broke the Dundalk/Cork duopoly at the top.

Beating Bohs is always a boon for Rovers, and the nature of the victory - late, away and on a horrible day in Dublin - will have really pleased Stephen Bradley.

Followers of the Hoops, never shy about building up their side's chances, might feel that this is the year they can finally reclaim the title. They'll need to carry their home form from last year, where they only lost twice, into 2020.

For Cork, they'll want to prove that pre-season predictions of a relegation struggle are wide of the mark.

Shamrock Rovers: Joey O'Brien dislocated his shoulder against Bohs but is reported to have declared himself fit.

Cork City: Conor Davis and Cian Bargary are both ruled out through injury.

Stephen Bradley (Shamrock Rovers manager: "It's very much a new team but I went down to watch Cork against Shelbourne and even though they lost the game, at times they showed real quality. They showed they were dangerous so we’ve got to respect that and be ready for that. Hopefully the Tallaght pitch doesn’t get too much rain over the next day or so and it allows us to play the type of game we like to play."

Neale Fenn (Cork City manager): "Obviously, Shamrock Rovers are a different proposition (to Shelbourne). We have to be better on the ball, don't panic, don’t rush, keep the ball.

"We need to play our way into the game and try to dominate the possession a bit more, rather than letting them dominate us. We kept it well at the back, but we were a bit tentative going forward, which is understandable."

Follow all the weekend's SSE Airtricity League Premier Division action with our live blogs on RTÉ Sport Online and the News Now App, and watch Derry City v Finn Harps live on RTÉ2 and the RTÉ Player from 7.30pm