The nine First Division clubs have issued a statement saying they will compete in the league "under protest" after backing down over the introduction of Shamrock Rovers II to the division.

The clubs formed a group known as the First Division Alliance and have been negotiating with FAI interim chief executive Gary Owens and said they considered the possibility of legal action.

The FAI have promised a review of the League of Ireland within six months that will include pathway, development, the participation agreement and involve the National League Executive Committee.

The nine clubs have agreed to take part in the First Division "under protest" and insisting it will be for one-year only.

They say they have received assurances from Owens and deputy chief executive Niall Quinn that this will be the case.

The Shamrock Rovers team will name a specific panel of Under-21 players and be able to utilise one overage outfield player as well as a goalkeeper.

One interesting facet of the statement is they claim that young players are joining Shamrock Rovers with the promise of development football in the First Division.

The clubs say "this brings into question the very purpose of academies and their role in Irish football".

They concluded by saying they opted against the legal route against Shamrock Rovers II competing in the league over fears of sanctions and the lengthy delay to the start of the league.

They also thanked the Premier Division clubs who supported their stance. 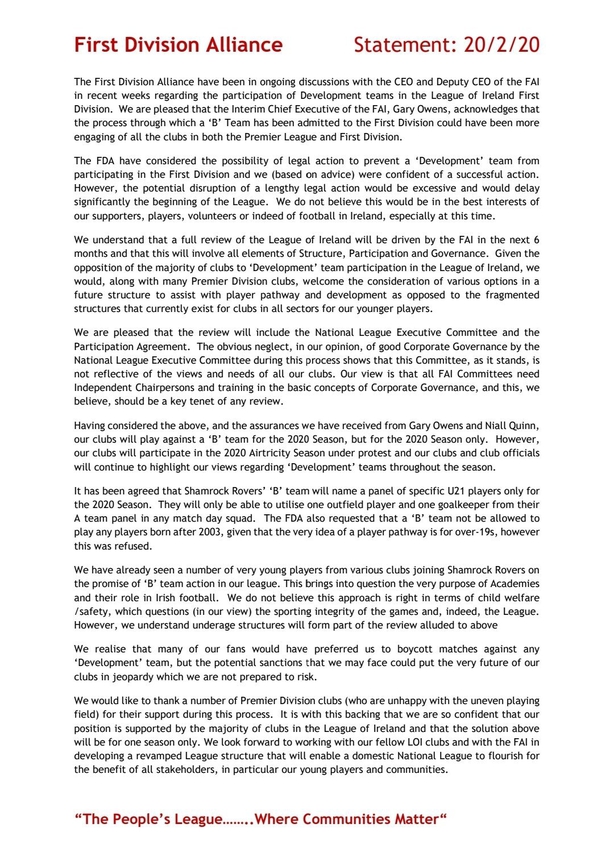