Son Heung-min struck a stoppage time winner, after a dreadful error from Bjorn Engels, as Tottenham Hotspur snatched a dramatic 3-2 victory at Aston Villa to move up to fifth in the Premier League.

In an enthralling match, Villa went ahead in the ninth minute when Spurs defender Toby Alderweireld turned an Anwar El Ghazi's cross into his own net.

But the Belgian centre-half made amends for that area when he fired Tottenham back on to level terms with a superb shot on the turn from inside the box.

VAR intervened to award the visitors a penalty after reviewing a challenge on Steven Bergwijn by Villa defender Engels and ruling that he had brought down the Spurs forward. 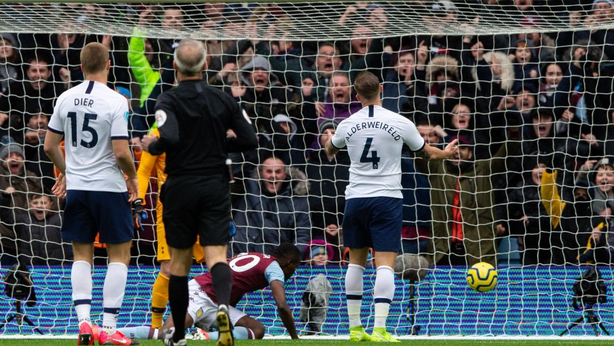 Son's weak penalty, after a stuttering approach run, was saved by Pepe Reina but the South Korean was the quickest to react as he bundled home the loose ball to send Spurs in ahead at the break.

Then it was the turn of Engels to cancel out his earlier error - the Belgian rising to meet a Jack Grealish corner and power in a header to make it 2-2.

But Engels was to end the game in despair as he mis-kicked a long ball forward and allowed Son to race clear and fire past Reina to take the three points.