Dundalk manager Vinny Perth said there was no sense of panic as they got the new SSE Airtricity League season off to a winning start against Derry City at Oriel Park.

Dane Massey scored the only goal with just over ten minutes to go as the Lilywhites picked up three points on the opening night for the first time since 2017.

Speaking to RTÉ Sport's Tony O'Donoghue, Perth said it was a postive way to start the new season.

"Two really good sides went for each other. I felt we done enough to win. To be fair Gary (Rogers) had to make two saves.

"They (Derry) started well, and then they went back in and sat in a little bit. But we're used to teams doing that.

"I think (Tim) Nilsen is an outstanding footballer for them up front.

"We are annual slow starters because we work so hard in pre-season. We think that's the right way to do it.

"So we're really glad of the three points tonight."

Dundalk huffed and puffed, but looked like their efforts were going to be in vain, until Massey volleyed home the winner.

They had three penalty appeals turned away, but Perth says he always thought they had a goal in them.

"That's that little bit of experience," he continued.

"There was no real panic in us tonight. As the game went on we were definitely the dominant side for that last half an hour.

"Ultimately the chances came. Peter's (Cherrie) made a great save, and we've hit the crossbar, and then the goal comes from the set piece.

"Well-worked, a brilliant ball by Jordan (Flores), and thankfully we get the three points."

The goal-scorer Massey echoed his manager's sentiments, and said he expects teams to come to the north-east and try to stop the defending champions from finding their rhythm.

"You have to give great credit to Declan Devine, he had them well set-up.

"They were compact, and they were hard to break down. I'm sure 95% of the teams that will come to Oriel Park will be like that. So it was really up to us to break them down.

"I thought we were excellent tonight. We created numerous chances, and I think we deserved the win."

The goal, he said, was a training ground move.

"It's great when they come off like that. You feel great that it's something you've worked so hard on.

"Annually myself and Sean Gannon have a little competition, and I don't think he's ever beaten me in my time here, so I'm off to a good start!"

Watch Bohemians versus Shamrock Rovers from Dalymount Park on Saturday afternoon on RTÉ 2 and the RTÉ Player from 1.30pm. 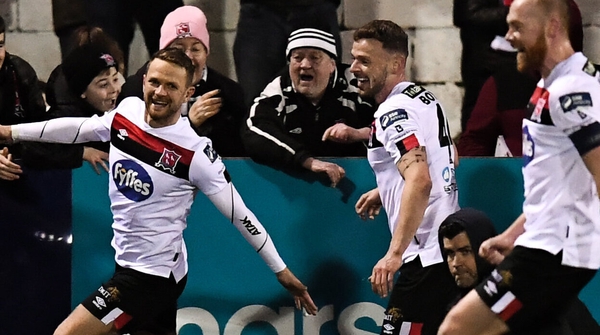