It's just shy of three months since we wrapped up the 2019 Airtricity League Premier Division campaign, but we're well and truly back now.

Bohemians host bitter rivals Shamrock Rovers in the pick of the first round of games, with both sides desperate to start on the right foot in what looks certain to be a rough-and-tumble derby.

This fixture was moved to a Saturday afternoon kick-off after discussions between both clubs and the FAI, who had consulted with An Garda Síochána.

It's a post-Valentine's Day showdown that will play out in the eye of Storm Dennis.

Conditions are going to be awful, so don't expect a free-flowing game of ball, but this fixture rarely fails to deliver drama. 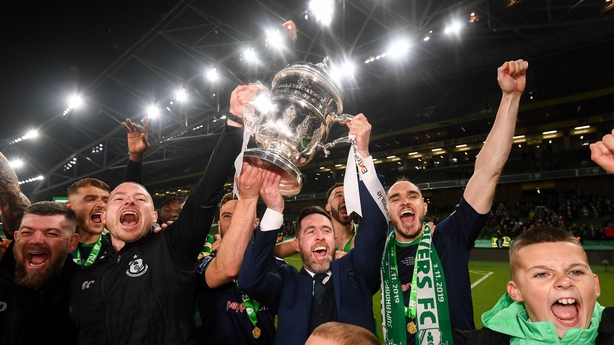 "There's always a buzz around Dublin derbies and we’ve got a few of them this year, with St Pat’s and Shelbourne back up there as well," said Hoops boss Stephen Bradley.

"It's a long off-season for the players. They had a few weeks off after the Cup final and they were back in. They just want that first game to come around.

"We'll go there focused and we’re fully prepared to go and win the game. We’ll see what the weather is tomorrow but it’s meant to be really bad. It might dictate what kind of game it’s going to be, but we’ll have to wait and see."

If Rovers are to get closer to Dundalk this year then they must improve on their record against the Lilywhites and Bohs. In the eight league games they faced Boh and Dundalk last year, Bradley's men won just once.

Rovers did of course turn Bohs over in the FAI Cup semi-final before going on to lift the trophy, so they'll hope that bodes well. But a rammed Dalymount is no easy prospect for any team in green and white.

Bradley is braced for a battle.

"Our pre-season preparations have been excellent," added Bradley.

"The players have worked really hard, they're really fit and ready to go.

"We’re very happy with the squad. If we want to improve it we can do that at any point, but we’re very pleased with the additions of Liam Scales and Rhys Marshall and how they’ve settled into the group. We want to better what we did last year, that’s the aim.

"A Dublin derby is great to kick off a season. It’s obviously sold out and it’ll be a typical derby game and one that we’re looking forward to."

Sean Kavanagh is recovering from surgery on a chipped bone in his knee, but apart from that, Rovers are at full strength.

Bohs have no major concerns either and could hand league debuts to Anthony Breslin, Kris Twardek, Callum Thompson and Ciaran Kelly.

The scene is set for the first Dublin derby of the season. Hold on to your hats.

Follow all the weekend's SSE Airtricity League Premier Division action with our live blogs on RTÉ Sport Online and the News Now App from 2pm on Saturday.