The holders' saw off Clyde 3-0 at Broadwood on Sunday with a much-changed Celtic overcoming the elements in the process.

The Hoops famously lost in the tournament to the Bully Wee at the same venue in 2006 but, after French midfielder Olivier Ntcham opened the scoring in the 16th minute, there was little chance of lightning striking a second time, despite Storm Ciara making conditions extremely difficult.

Parkhead skipper Scott Brown stabbed in a second five minutes before the interval to further deflate the Scottish League One side, with substitute Vakoun Bayo adding a third in the last minute.

Ultimately, notwithstanding the foul weather, it was a comfortable afternoon for the Hoops, who have won the last 10 competitions in Scotland and are looking to win the Scottish Cup for an unprecedented fourth successive time.

Their reward for beating Clyde is a trip to McDiarmid Park, home of their Ladbrokes Premiership rivals St Johnstone.

"At this stage it is always going to be tough," said Kennedy.

"St Johnstone has been a good place for us in terms of scoring goals up there and performance levels have been good of late, so again we know it will be tough but we will come round to that when it comes and we make sure we deal with Hearts on Wednesday and look forward from there." 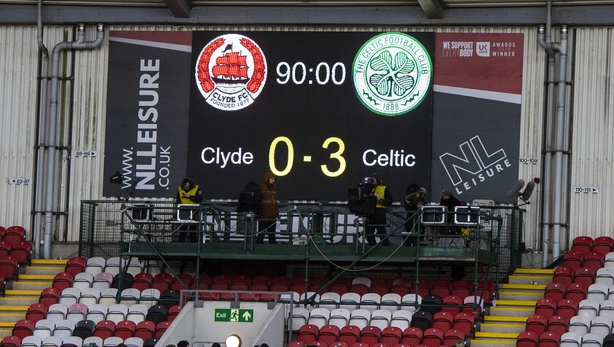 Rangers will take on Hearts at Tynecastle in the tie of the round on paper, while Hibernian host Championship side Inverness.

Aberdeen and Kilmarnock will have to fight it out again after their goalless draw at Pittodrie on Saturday.

Another two Premiership clubs, St Mirren and Motherwell, will have to replay after their 1-1 draw in Paisley.

Rangers who have not won the trophy since 2009, beat Hamilton 4-1 on Saturday.

Inverness took their place in the last eight at Livingston's expense thanks to Sean Welsh's second-half free-kick.

The ties are set to take place on the weekend of 29 February and 1 March.