A superb solo effort from Allan Saint-Maximin saw Newcastle edge past Oxford in extra-time of their FA Cup replay and reach the fifth round for the first time in 16 years.

Oxford took the tie the distance with two goals in a frenetic final six minutes of normal time but Saint-Maximin's strike was enough to settle the contest 3-2 in favour of Steve Bruce's side.

Recent cup runs have been lacking for Newcastle but they would have thought they were on a smooth course to round five as Sean Longstaff and Joelinton had them two goals up at half-time of a replay which stemmed from a forgettable 0-0 draw at St James' Park.

But their League One opponents rallied late on, former Republic of Ireland underage international Liam Kelly's free-kick getting them back into the tie before Nathan Holland's fine strike deep into added time took the game into extra-time.

Karl Robinson's side were the livelier of the two as the additional 30 minutes got under way but, after a few miscues from his team-mates, Saint-Maximin provided the heroics.

The striker scored from the spot to cap the Rams' 4-2 fourth-round replay win over the Cobblers on Tuesday.
They will now host 12-time winners United in the fifth round next month.

Nicky Adams' goal threatened to haul Northampton, the lowest ranked team left in the competition, back into the tie while Sam Hoskins scored a late penalty. 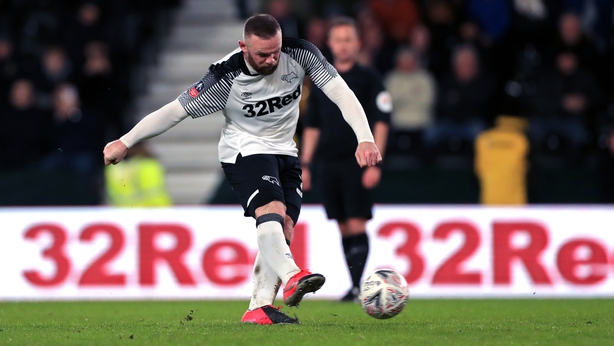 He will now face United next month for the third time since leaving Old Trafford for Everton in 2017.

It was ultimately a routine win for Phillip Cocu's side at Pride Park following their 0-0 draw in the first tie last month.

In a game that finished 3-3 after extra time, Josh Murphy and Robert Glatzel struck either side of the interval for Cardiff before Omar Richards and substitute Andy Rinomhota forced another 30 minutes.

Reading won the resulting shoot-out 4-1 as Garath McCleary, Osho, Jordan Obita and Sone Aluko gave the Royals a 100 per cent return from the spot and Cardiff's nerve buckled as Aden Flint and Will Vaulks missed.

Goalkeeper Lee Camp was Birmingham's hero as the Sky Bet Championship side clinched a place in the fifth round on penalties against Coventry.

Camp saved penalties from substitutes Liam Walsh and Jamie Allen as Birmingham won 4-1 in a shootout after twice coming from behind in a 2-2 draw after extra-time.

Captain Harlee Dean's spot kick sealed victory, while substitutes Lukas Jutkiewicz, Jeremie Bela and Gary Gardner also netted from the spot to enable Birmingham to book a trip to Leicester in the last 16.

Dean made it 1-1 in the second minute of time added on, and a hopeful cross by Bela in the 120th minute saw Birmingham draw to cancel out goals from Amadou Bakayoko (50) and Max Biamou (114).