Michael Obafemi and Ronan Curtis have been catching Republic of Ireland manager Mick McCarthy's eye ahead of the UEFA Euro 2020 play-off semi-final against Slovakia in March.

McCarthy watched Obafemi play for his club for the first time last Saturday in the FA Cup against Tottenham Hotspur, having previously left it to his assistants and scouts.

Shane Long, who the Ireland boss may have been due to check out, was rested for the game due to a knee concern.

Obafemi started alongside Danny Ings in the Saints attack.

"I’ve had Michael watched several times but this was the first time I’ve seen him live myself and I did like what I saw," McCarthy told FAI.ie

"He linked up well with Danny Ings, he got in behind the Spurs defence and while he didn’t have that many shots himself, he was a constant nuisance for the opposition.

"Michael did all the things I expected of him very well. We had Southampton watched when they won at Crystal Palace recently and the reports on Michael, Shane and James McCarthy were all very positive.

"Like all our players, Michael is benefitting from regular first-team football and he certainly gave me something to think about on Saturday. I’ll be back to watch him again and to have a look at Shane.

"I’ve also kept in regular contact with Shane and I’ve repeatedly told him that his return to form with his club will count for March." 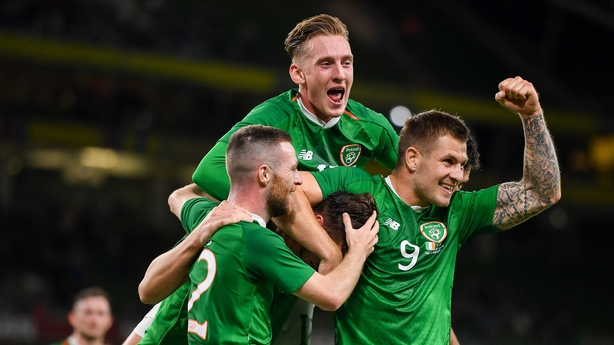 Curtis is another player impressing McCarthy. He has been linked with a move to the Championship after his stunning season with Portsmouth that's included 12 goals.

"He scored against my hometown club but I won’t hold that against him," laughed McCarthy.

"Seriously Ronan has been in great form of late.

"He’s got 12 goals this season and he was the League One Player of the Month for November and December so he is right back in contention for a call-up for the Slovakia game.

"Ronan, like Michael Obafemi and Shane Long, is one of a number of Irish players coming into form right now which is great news at this point in the season.

"I said last year that once we got to January the time flew until the qualifiers in March and I expect it will be the same for the play-off. We just need these players to keep fit, keep playing well and keep giving me a headache about the squad selection."

McCarthy has pledged to travel England – along with his scouting team –  over the next two months to get all the information needed to pick his squad for the crunch match in Bratislava.

"We are putting the miles in and I can promise the fans that no stone will be left unturned between now and the end of the March," continued the Republic boss.

"Will Keane got his passport sorted last year but he has struggled with injuries until now and we will keep an eye on him at Ipswich. Jayson Molumby is impressing everyone at Millwall while Jason Knight, Conor Masterson and Dara O'Shea are all taking their chance in the Championship at present, which is great for us.

"It’s not all about the kids though. James McClean is coming into his own under Michael O’Neill at Stoke, Glenn (Whelan) is really enjoying working with Joey Barton at Fleetwood and Darren Randolph is back in the Premier League where he belongs.

"I know March is a long way off but there is a real feelgood factor about the players available for the squad now. Long may that continue."