Manchester United thrashed third-tier Tranmere Rovers 6-0 on Sunday to join Manchester City in the fifth round of the FA Cup.

A muddy and bobbly Prenton Park pitch looked the perfect stage for a shock but Tranmere were blown away as Harry Maguire's early thunderbolt settled any United jitters.

Tranmere had knocked out Premier League Watford in a replay on Thursday but apart from an early flurry of pressure they were never in Sunday's tie as United scored five times before the break.

Diogo Dalot, who like Maguire had not scored all season, made it 2-0 after weaving into the penalty area and delivering a fierce finish before Jesse Lingard curled a right-footed shot inside the post for only his second goal of the season. 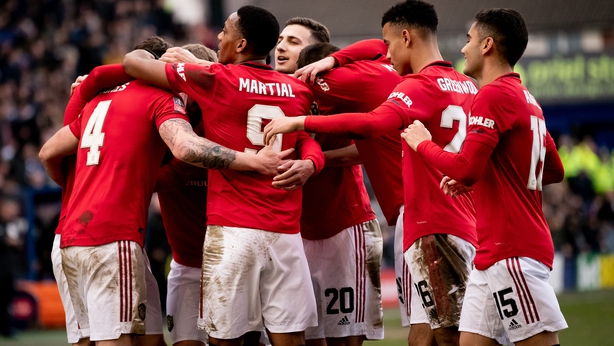 Phil Jones got in on the act with a looping header from a corner, ending his own near six-year goal drought, before Anthony Martial added a fifth goal just before the break.

It was the first time since 2001 that United had scored five before halftime and they continued the onslaught after the break when Mason Greenwood converted a 56th-minute penalty.