After last weekend's last-gasp loss at Newcastle was compounded by a late Arsenal leveller on Tuesday, Frank Lampard's Blues avoided a frustrating week getting any worse at the Sky Bet Championship play-off hopefuls.

Hull looked bright at times in front of their first sell-out crowd since dropping out of the Premier League in 2017, but Chelsea ran out 2-1 victors as Michy Batshuayi's deflected opener and a Tomori header proved enough despite Kamil Grosicki's late goal from a free-kick.

City had not won any of their previous 10 FA Cup encounters with the Blues and were facing an uphill battle from the sixth minute, when Batshuayi's strike went in off Ryan Tafazolli as Lampard's side put a sloppy start behind them.

But Tomori, who spent the 2017-18 campaign on loan at the KCOM Stadium, ended that period of ascendancy for McCann's side by scoring a close-range header, with Chelsea digging deep after substitute Grosicki's deflected free-kick went in off Mateo Kovacic. 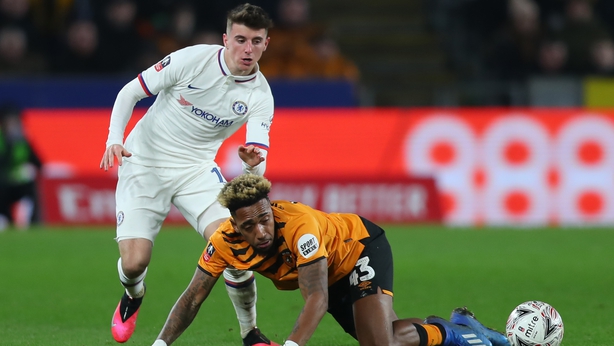 The Croatia midfielder was one of three Chelsea players to retain a starting spot following the 2-2 draw with Arsenal and played a key role in the early opener.

Lampard's much-changed side had started sloppily against a Hull side buoyed by a full KCOM Stadium, where Kovacic's diagonal pass found Cesar Azpilicueta wide on the right.

Mason Mount was blocked out when found by Chelsea skipper's first-time cross, but Batshuayi picked up the loose ball and fired home via a deflection off Tafazolli.

It was a gut punch that left Hull reeling.

Other than a Mallik Wilks cross that Willy Caballero flapped at, Chelsea were on the front foot as they switched play well and looked to expose the hosts' vulnerability at full-back.

Long raced off his line to deny Ross Barkley before the England international dragged wide, with the Hull goalkeeper producing another fine stop when Mount attempted to dink the ball over him.

The volume inside the KCOM Stadium rose after that save, with Bowen and Tom Eaves having half-hearted attempts before the first half ended with another fine Long save as Azpilicueta got away a fierce stoppage-time shot.

Hull were fortunate to go into the break just a goal down, but McCann's team started the second period positively and pushed for a leveller.

Bowen came closest for the Tigers, underlining the quality that has led to many admiring glances. He burst forwards and forced the Chelsea defence back, before taking a strike that flew just over Caballero's goal.

Grosicki was brought on as Hull scented blood, yet they would be caught cold in the 64th minute.

Barkley flung in a free-kick from the right and Tomori all too easily shook off the attention of George Honeyman to head home in front of the visiting support.

Chelsea went close to a third as the match entered the final 20 minutes as Pedro struck a left-footed effort across the face of goal, with the Spaniard again going close after Batshuayi and Tomori had attempts.

Those missed opportunities gave Hull hope and Grosicki brought a nervy ending, hitting a 20-yard free-kick that found the top corner thanks to a huge deflection off Kovacic.

Chelsea substitute Billy Gilmour was denied from distance and Marcos Alonso flashed over as the game became stretched, with Hull pushing for a shock equaliser.

Grosicki put wide as Hull threw everything at Chelsea late on, but Lampard's side held out.