Roberto Firmino's late strike at Wolves continued Liverpool's fairytale season to move them 16 points clear at the top of the Premier League.

The forward snatched a 2-1 victory with six minutes left to maintain the Reds' unbeaten Premier League run, although they were given a major scare at Molineux.

But Liverpool were indebted to Alisson after vital saves from Jimenez and Adama Traore when they were under serious second-half pressure.

Victory allowed Jurgen Klopp's relentless side to stretch their unbeaten league run to 40 and they still have a game in hand in next week's trip to West Ham.

Wolves, who remain seventh, dominated much of the play after the break but became another victim of the Liverpool juggernaut.

The hosts knocked the Reds out of the FA Cup at Molineux last season and looked for a repeat result early on.

But Liverpool underlined their status as runaway leaders when they went ahead after eight minutes.

Trent Alexander-Arnold's free-kick was deflected behind and from the resulting corner his delivery found Henderson to nod in his second goal of the season from six yards. 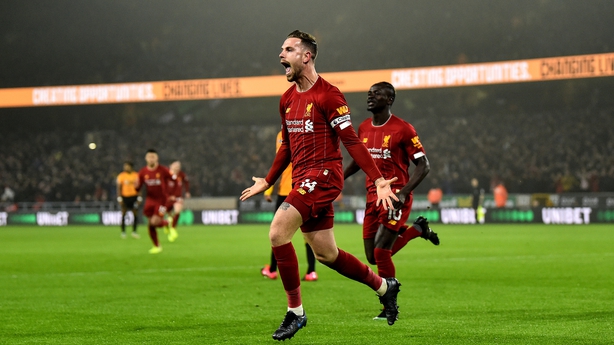 They refused to let Klopp's side rest on the ball or dictate the early tempo although failed to click in the final third.

Liverpool also struggled to create clear chances, with Mohamed Salah denied by a combination of Jonny and Romain Saiss when he found a rare opening.

They would have been encouraged having ridden out Wolves' pressure but suffered a first-half setback when Sadio Mane was forced off after 33 minutes. Takumi Minamino replaced him for a Premier League debut.

Jimenez dragged a shot wide eight minutes before the break but Wolves survived a fright late in the half.

Salah raced onto Firmino's header to dart into the area but his shot hit Doherty and looped into Rui Patricio's arms.

The goalkeeper had to be more alert a minute after the break, though, when Salah robbed Traore only to see Patricio turn his sharp drive away.

It proved vital as Wolves, who had threatened to produce a moment of quality, found the equaliser six minutes into the second half. 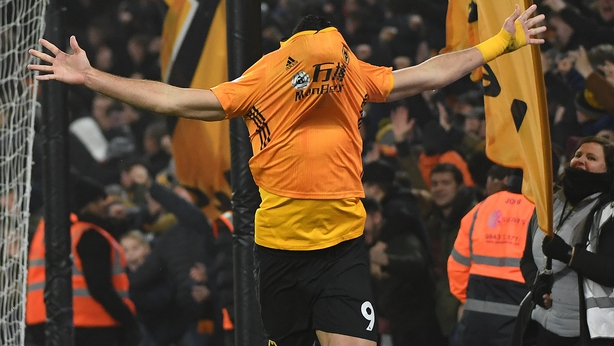 Jimenez fed Traore and continued his run into the box where he arrived unchecked to power in a header from the winger's pinpoint cross.

The Wolves winger was causing countless problems for Liverpool and slipped Jimenez in with 22 minutes to go, with Alisson making a vital block.

Salah fired wide in a brief opening for the visitors but Wolves continued to be a menace - with Traore the ringleader.

Yet Firmino nearly restored the Reds' lead with eight minutes left when he bundled his way through, only to be denied by Patrico's legs.

It was only a warning though as, two minutes later, the Brazilian snatched the winner.

Salah was crowded out on the edge of the area but Henderson managed to slip in Firmino and he smash an angled drive across Patricio into the corner.

Substitute Diogo Jota could have still levelled for the hosts but hooked over from close range as Liverpool survived.