Thibaut Courtois was the hero for Real Madrid as they won the Spanish Super Cup final with a 4-1 penalty shootout victory over rivals Atletico Madrid.

Courtois kept out Thomas Partey's spot-kick out after making a number of vital saves following Federico Valverde's red card in extra-time, as it ended 0-0 after 120 minutes.

Saul also missed for Atletico, allowing Sergio Ramos to convert the winning spot-kick in the first year of the revised format of the competition, which was played in Saudi Arabia.

It was an 11th Super Cup for Real, who dominated the 90 minutes but ended up relying on Courtois to send the game to penalties with two big stops.

The La Liga match between the two sides ended goalless in September, so there was no surprise that this was a cagey affair in Jeddah.

Real settled the quickest, but Diego Simeone's men, who beat Barcelona in the semi-finals, created the first big chance as Joao Felix intercepted Ramos' pass on the edge of the area, but his snapshot went wide of the far post.

Zinedine Zidane's men began to dominate possession, but this was a Simeone defence they were up against and chances were hard to create.

Their best of the opening 45 minutes came when left-back Ferland Mendy went on an adventurous run but his shot was easy for Jan Oblak to save.

They immediately carried more threat after the break as Luka Jovic was in menacing form, going close after getting free of two defenders.

Jovic was enjoying himself and provided a superb chance for Valverde midway through the second half, but the defender somehow headed on to his own knee inside the six-yard box.

Atletico had been camped in their half but had a chance to go ahead with 11 minutes left when Kieran Trippier teed up Alvaro Morata but his former Chelsea team-mate Courtois got down well to keep out a low shot. 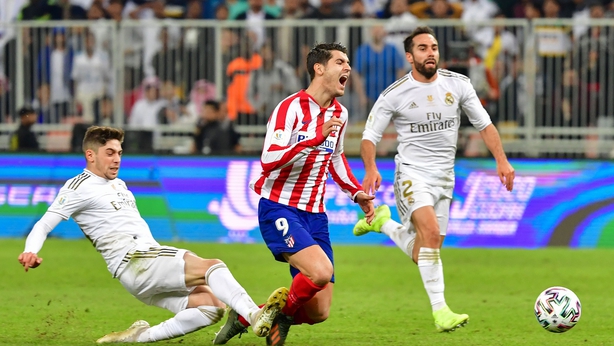 With extra-time looming Real had a chance to claim glory as the ball fell to Rodrygo but he shot straight at Oblak.

Valverde saw red in the additional period for hacking down Morata when he was through on goal and then Courtois had to produce two big saves to keep his side in it.

He kept out Trippier's low cross and then did well to stop Angel Correa's effort and those saves proved vital.

After Saul missed Atletico's opening penalty by hitting the post, the Belgian stopper then made a save off Partey's effort to put Real in command.