Dundalk manager Vinny Perth scooped the Personality of the Year accolade at the SSE Airtricity League/Soccer Writers' Association of Ireland Awards in Dublin on Friday night.

The reigning Premier Division, EA Sports Cup, Unite the Union Champions Cup and Presidents Cup champions had cause for double celebration when veteran netminder Gary Rogers was named Goalkeeper of the Year at the Clayton Hotel Burlington Road.

Perth stepped up to the top job at Oriel Park following the departure of Stephen Kenny and ensured the club's domestic dominance continued.

Runner-up on the night was Shamrock Rovers midfielder Jack Byrne, who capped a stellar 2019 with a Republic of Ireland debut, as well as helping the Hoops lift the FAI Cup for the first time in 32 years.

"This is a really special award, I’ve been coming here a long time, usually carrying the trophy to the back of Stephen’s (Kenny) car," Perth quipped.

"It’s an awkward one to win, you’re competing against your own players, you see the job Keith Long has done with Bohs and it’s great to see Stephen’s (Bradley) quality to shine through at a big club and win a trophy.

"I’m proud to be part of this league, and when I see someone like Jack Byrne get an Ireland call-up on merit, it just shows the ability there is here. I’m proud of what Jack has done."

Goalkeeper gong winner Rogers was once again a consistent and calming presence for the champions last season.

A leader on and off the pitch, Rogers had the most clean sheets (27) in all competitions and now holds the record for European appearance by a League of Ireland player (45).

"Its a great way to start off the year. You’ve got to enjoy these moments," Rogers said.

"I’m enjoying these great times at Dundalk. It’s been a really good period for the club and a purple patch with our success. I want to be part of contributing to that in the future. 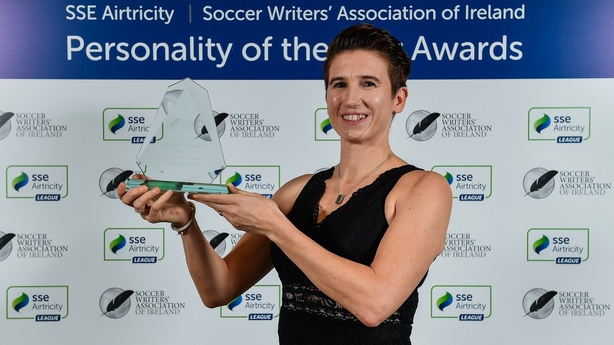 Michelle O’Neill was honoured with the Liam Tuohy Special Merit Award after the Wexford official was assistant referee as part of the first female team to take charge of a major men’s European final in the UEFA Super Cup between Liverpool and Chelsea.

O’Neill, a referee in the FAI Continental Tyres Women’s National League and assistant in the SSE Airtricity League, also had the major honour of assisting match referee Stephanie Frappart for the Women’s World Cup final between the USA and the Netherlands.

On the domestic front, O’Neill officiated the Unite the Union Champions Cup between Dundalk and Linfield.

"I just want to say thank you very much because this is a fantastic honour," she said.

"Being a part of the World Cup final, it was the realisation of all the hard work, walking out and achieving my dreams. That’s the pinnacle of my career.

"Every time I step outside of Ireland and put on my referee kit I see myself as representing Ireland and I want to do the country proud.

Former Republic of Ireland and Celtic goalkeeper Packie Bonner received the International Achievement Award almost 30 years on from his penalty shootout heroics against Romania at Italia 90.