Stoke City have condemned "discriminatory" chants aimed at James McClean and offered the Republic of Ireland international their full support.

McClean has been the target of chants in Championship games at Huddersfield and Barnsley this season, with the latter charged by the English FA in connection with allegations of sectarian abuse.

A statement on the official Stoke website read: "At recent fixtures opposition fans have sadly targeted James McClean with vile anti-social chanting leading to the FA issuing charges against one club.

"Stoke City wish to reiterate their continued support for James.

"We believe the chanting to be discriminatory and, like any other hate crime, there is no place for it in society and the perpetrators should be held accountable.

"As a club we have always supported James and will continue to do so."

Derryman McClean has found himself in the firing line in recent seasons for his decision not to wear a poppy on his shirt in the game closest to Remembrance Sunday.

The 30-year-old midfielder has said that decision was taken out of respect for those who died in the city on Bloody Sunday in 1972. 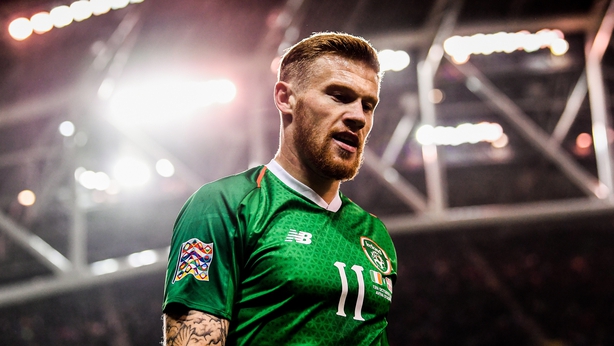 "I appreciate the backing the club have given me since I joined in 2018 and it's reassuring to know that support remains," McClean was quoted as saying in the Stoke statement.

The statement continued: "The club reminds all supporters that football is a game for all and that we should treat each other with respect and dignity.

"Discriminatory or abusive chanting of any kind is simply unacceptable.

"It can be reported by using the Kick It Out app, which is available to download from Google Play or the App Store, or by texting the club on 07920 448 570."

"We're fully behind this statement," Kick It Out posted.

"The continued discriminatory abuse targeted at James McClean is absolutely unacceptable and if you see it or hear it, report it to us or @stokecity."

Barnsley were charged by the FA last week after chants were heard during Stoke's Championship game at Oakwell on 9 November, which was played in the run-up to Remembrance Sunday.

That came just days after the FA launched an investigation into allegations of discriminatory chanting aimed at McClean during the Potters' 5-2 win at Huddersfield on New Year's Day.

A tannoy announcement was made during the game at the John Smith's Stadium to warn spectators about the use of inappropriate language.