Cork teenager Adam Idah struck a hat-trick to fire Norwich into the fourth round of the FA Cup for the first time since 2013 as they brushed aside Preston 4-2 at Deepdale.

Idah, making only his second Norwich start days after his Premier League debut as a substitute against Crystal Palace, opened the scoring inside 90 seconds and made it 3-0 before half-time when he fired in a second from distance.

In between the 18-year-old played a key role in Onel Hernandez's strike and he was not done there, sealing his hat-trick from the penalty spot in the 61st minute after Billy Bodin pulled one back for Preston.

Congratulations on your win! Here are your highlights pic.twitter.com/eyFL0tjMrl

Josh Harrop got a second for Preston with six minutes left, but Norwich had done enough to win their first third-round tie since winning 3-0 at Peterborough seven years ago.

The extent to which Daniel Farke was concerned about advancing was unclear given his team selection, but in a season of Premier League struggle, this result will offer hope that the club has a new goalscorer on the way through.

With his side rooted to the foot of the Premier League, seven points from safety and with a trip to Manchester United up next, Farke made eight changes from their 1-1 draw with Crystal Palace on New Year's Day, with only Sam Byram, Christoph Zimmermann and Todd Cantwell retained. 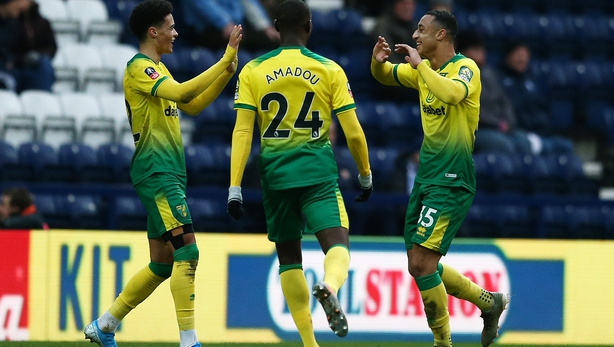 But that was one less than Preston boss Alex Neil, who kept only Darnell Fisher and Ben Davies from their 2-0 defeat at Middlesbrough, preferring to focus on next weekend's Championship derby against Blackburn and their play-off push.

That could have been a recipe for a pretty flat match but instead Idah provided the spark.

The Republic of Ireland under-21 forward needed only 84 seconds to score his first Norwich goal. Marco Stiepermann's pass sliced open the Preston defence and released Idah, and he slipped the ball beyond Connor Ripley and into the corner of the net.

Idah was involved again when Norwich doubled their lead just before the half-hour mark as he broke through the Preston defence again. This time Ripley blocked Idah's shot but then failed to deal with Hernandez's strike as he followed up.

And the game looked over before half-time as Idah struck his second - another moment Ripley will not want to see again.

The keeper, standing in for regular stopper Declan Rudd, came darting off his line to beat Hernandez to the throughball, but succeeded only in playing it to Idah who lofted a shot into the net from distance.

Preston started the second half much stronger. Bodin's left-foot shot was straight at Michael McGovern but the power caught out the Northern Ireland goalkeeper who could only parry it, and Bodin scored from the resulting corner, nodding in from close range after Jordan Stockley rose to meet the cross.

Preston had their tails up as Davies headed narrowly wide from a corner and Harrop tested McGovern again, but Norwich rode that storm and would soon finish off their hosts.

Ripley hauled down Idah as he ran through on goal, collecting a yellow card, and the teenager coolly slotted home the penalty for his hat-trick.

There was still time for Harrop to score a second for Preston, finding the far corner from close range from Bodin's neat pass, but Idah had already done enough to send Norwich through.