Southampton will check on Republic of Ireland international striker Michael Obafemi ahead of the Premier League clash with Tottenham on New Year's Day.

The 19-year-old, who scored in the St Stephen's Day win at Chelsea, missed Saturday's 1-1 draw with Crystal Palace due to illness.

Obafemi’s strike against Chelsea was his second goal this term in 10 appearances.

The 32-year-old, who has slipped down the international pecking order, last played against Aston Villa four days before Christmas and is still awaiting his first goal this season after 13 outings.

Elsewhere for Southampton defender Yan Valery is also in a race against time to face Spurs after picking up an infection.

Manager Ralph Hasenhuttl has called on his defence to firm up so Southampton do not become over-reliant on star forward Danny Ings.

Ings has netted 12 times in 16 Premier League appearances this season to propel Saints out of the relegation zone and raise the prospect of an England call-up.

He was named on the bench for the 2-0 victory at Chelsea on Boxing Day to reduce his workload but will start Wednesday's home clash with Tottenham.

Hasenhuttl's team have struggled at the other end, however, with only rock-bottom Norwich having conceded more top-flight goals than Saints' 38 in 20 games so far.

"We have a few players who can score and, in the end, it's also about getting less goals going against us," the Austrian said.

"We had a clean sheet against Chelsea and it was a good performance in the defence against Crystal Palace (1-1 draw on Saturday) - we didn't give them a lot of chances.

"Sometimes this is more important for me than the fact Ings scores every game. Danny took a rest against Chelsea. He's working much more for the team at the moment."

The opening of the January transfer window can not come soon enough for Hasenhuttl.

"I would like to make transfers and the sooner we can get somebody the better it is," he said.

"We've spoken about the full-back positions we have at the moment - Cedric Soares and Ryan Bertrand and that's it. So for two positions two players.

"It's clear you look differently at every duel they are getting in on the pitch because you know there are not a lot of alternatives at the moment.

"It's not too easy in the winter to find someone who will help you immediately, but the guy we bring in must help us immediately." 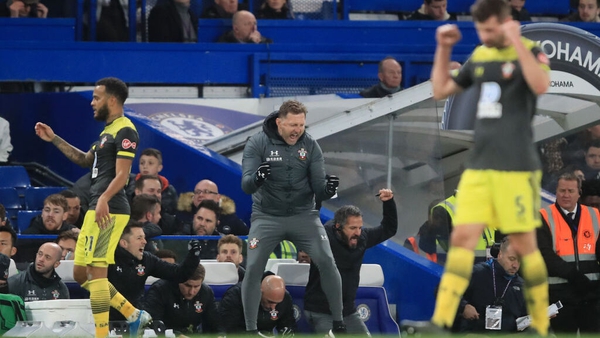