The Ibrox club believe the Colombia international was targeted after he was sent off by referee Kevin Clancy in the closing stages of the Light Blues' 2-1 victory after picking up the second of two yellow cards.

A Rangers spokesman said: "We believe Alfredo was racially abused and we would expect now that all measures will be taken to identify and deal with those responsible."

Celtic responded with a statement which read: "We are aware of the gestures made by the player towards Celtic supporters.

"We have received no reports of any racial abuse but would fully investigate any should these be brought to our attention."

Morelos made some gestures with his hand across his throat as he made his way off and up the tunnel.

The Govan club insisted in an earlier statement calling for the introduction of VAR, that the striker's actions had been misinterpreted.

It read: "Even Alfredo's gesture as he left the pitch is now being portrayed in some quarters as something sinister when, in fact, it is a gesture used commonly throughout South America to indicate quite simply that something - in this case, the match - is finished."

Meanwhile, Rangers have again called for the introduction of VAR in Sctoland following the game Parkhead.

Goals from Ryan Kent and Nikola Katic took the Light Blues to within two points of the Hoops at the top of the Ladbrokes Premiership with a game in hand.

Afterwards Gers boss Steven Gerrard had no real complaints about the performance of referee Kevin Clancy, aside from saying he should have sent off Celtic defender Christopher Jullien for a tangle with Morelos, before the Colombia striker was dismissed in added time for picking up a second yellow card.

In a statement on Rangers' official website, managing director Stewart Robertson said:  "This is not a criticism of referees because they often have to perform under very difficult conditions and in a highly emotive environment, as do our players and coaches.

"The speed at which the modern game is played also means it is extremely difficult to make split-second calls with the degree of certainty required.

"We believe the introduction of VAR would help referees enormously and reduce the number of wrong decisions which sometimes have a dramatic effect on the outcome of matches.

"In recent weeks, Rangers has suffered from errors of judgement but it is our strong view that VAR would be to the benefit of everyone and in particular the referees themselves." 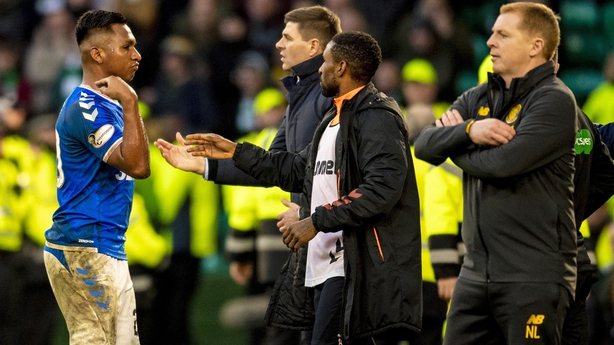 Without attribution, a list of incidents and issues were then highlighted.

"In this month (December) alone, Rangers has suffered from three glaring errors in key matches.

"On 4 December at Pittodrie the referee failed to see Alfredo Morelos had been fouled inside the box and awarded a free-kick outside the penalty area. The referee apologised to Steven Gerrard after the match but the damage had been done and Rangers had to settle for a 2-2 draw and the loss of two points.

"Then, just four days later at Hampden, Rangers lost the Betfred Cup final when the officials failed to see that not just one,  but three players were clearly offside when the only goal of the final was scored.

"On Sunday, during the final game before the January break, the referee and his assistants awarded a goal even though the ball had been deflected into Allan McGregor's net off a hand of an opposing player.

"That goal should never have stood and would undoubtedly have been overturned had VAR been in use.

"A number of other incidents, including the clear foul by Julien on Alfredo Morelos as he attempted to break clear, were also missed.

"Instead, and inexplicably, a foul was given against Alfredo. There can be little doubt Alfredo is singled out for special attention, on and off the field of play.

"Indeed, some of the things said and written about him leave a lot to be desired and do nothing to suggest Scottish football is the most welcoming of environments.

"Even Alfredo's gesture as he left the pitch is now being portrayed in some quarters as something sinister when, in fact, it is a gesture used commonly throughout South America to indicate quite simply that something - in this case, the match - is finished.

"However, the main point is that VAR, which is now used in many leagues throughout Europe, would help eradicate refereeing mistakes and greatly assist our match officials.

"At the very least, the SFA/SPFL must now seriously consider the introduction of the system at the earliest opportunity otherwise the Scottish game is in danger of being left behind.

"Rangers has already written to SFA chief executive Ian Maxwell asking that the association look at consideration the introduction of VAR and the club is once again urging both governing bodies to give this matter serious consideration and study.

"Rangers is aware of the financial argument against VAR but the cost to clubs which suffer from such game-changing decisions and the integrity of our game must also be given priority."