Liverpool defender Virgil Van Dijk admits 2019 was an important breakthrough year for the players but insists they are not allowing themselves to look ahead to what could prove to be even more memorable 2020.

The Reds closed out a 12 months in which they won the Champions League, the European Super Cup and the Club World Cup with a hard-fought 1-0 win over Wolves which re-established their 13-point lead at the top of the Premier League table.

They also have a match in hand - to be played against West Ham at the end of next month - over second-placed Leicester and Manchester City, in third, and look nailed on to end a 30-year wait for the title in May.

"If you are able to play for trophies when you are in finals then you want to win them so we have been doing that since the Champions League so it is a nice habit.

"I think the most important thing was the Champions League. That is something incredible and we all enjoyed that - but we all enjoyed the ride we had in the Premier League last year (finishing one point behind City).

"We came very close, unfortunately City were just a little bit better but that spurred us on to try even harder this year and so we have been winning games, grinding games out and playing good football at times.

"We enjoy the hard work too so that is very good. Hopefully we can just keep going doing that and just be hungry for that as well.

"We are halfway through now and we hope to finish the season on a high so for that we have to focus on the game ahead of us." 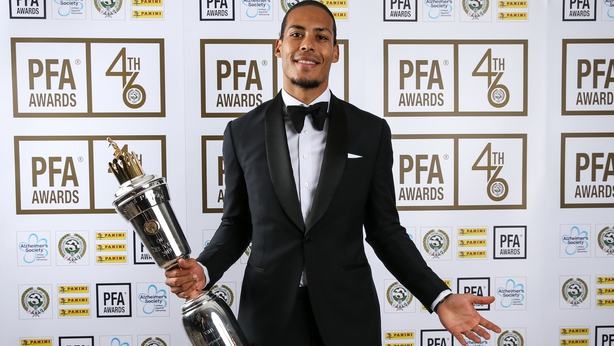 Despite their commanding lead, Van Dijk said there was no risk of the players becoming complacent, having taken 55 points from a possible 57 so far.

"Obviously last year we have seen anything can happen and this year we just focus on the game ahead of us and we will see at the end when it will be decided, hopefully in our favour," he added.

"We should be learning from what happened last year and I feel that is definitely what has been going on."

Van Dijk brought up 100 appearances for the club in the game against Wolves since arriving from Southampton almost two years ago.

"Most of the games I've been on a consistent level as well, so I'm very happy about that.

"Obviously sometimes you could always be better but I'm not a robot, I'm not perfect. So, I'm just enjoying the ride and we'll see where it ends."