Republic of Ireland international Michael Obafemi struck for his first Premier League goal of the season as Southampton left Stamford Bridge with a 2-0 victory over Chelsea.

Just over a year ago, Obafemi became the Saints' youngest ever Premier League goal scorer in the 3-1 defeat of Huddersfield three days before Christmas, and his left-footed curling finish gave the visitors a narrow lead at the interval.

It was the 19-year-old’s second goal this term in 10 appearances after a League Cup strike against Fulham back in August.

Nathan Redmond’s goal with just over quarter of an hour remaining wrapped up the three points to secure Southampton’s sixth win of the campaign, and their second win on the spin away from home. 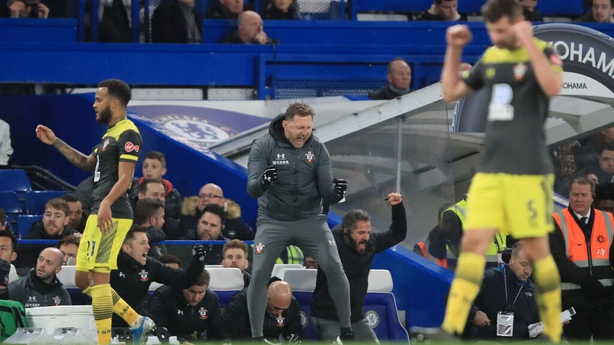 The wretched home form of Frank Lampard's men took another turn for the worse, with the Blues sinking to a sixth loss in 15 Stamford Bridge matches in all competitions this term.

Lampard's Blues remained fourth in the table despite their defeat, with Sunday's 2-0 win at Tottenham keeping their north London rivals down in fifth.

Obafemi and Redmond took their goals well but two smart finishes would in no way mask Chelsea's shortcomings on home soil.

Ryan Bertrand's booking for time wasting less than half an hour into the contest underscored Saints' entire strategy to scrap for the the ball.

Obafemi was put through on goal by his captain Pierre-Emile Hojbjerg and seized on the space afforded by the tentative Fikayo Tomori to curl a smart finish past a helpless Kepa Arrizabalaga. 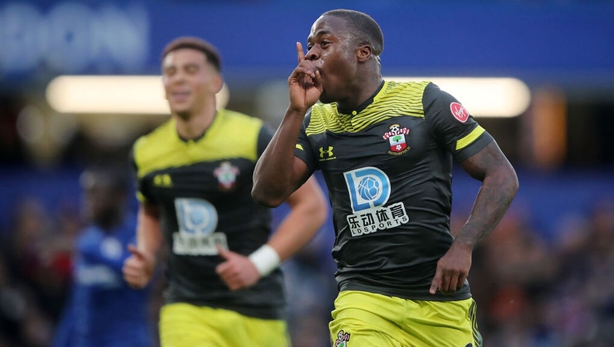 Callum Hudson-Odoi lost the ball cheaply to allow Hojbjerg the time to thread Obafemi into space.

And just when Chelsea would have expected to start squeezing the contest in their favour, the hosts lost any grip on proceedings instead.

Lampard ditched the 3-4-3 formation at half-time, determined to jolt his sluggish Blues back into attacking life.

Kurt Zouma was sacrificed in the switch to 4-2-3-1, with Mason Mount thrown into battle and challenged to deliver the missing creative spark.

Mount had impressed in an astute and assured performance in Sunday's 2-0 win at Spurs, and was straight into the action again on Boxing Day.

No sooner had the half started than Mount slid a smart ball through for Tammy Abraham, who spun into the inside right channel and left his markers for dead.

The England hitman lashed goalwards, only to see the ball flash past the wrong side of the post.

Saints continued to threaten on the break however, with Redmond tormenting Antonio Rudiger before Tomori produced a desperate sliding clearance to thwart the lurking Che Adams.

Redmond should have doubled Saints' lead when played clean through, but the former Norwich and Birmingham man could only poke tamely at Kepa's legs.

The disappointing Hudson-Odoi was hooked in favour of Christian Pulisic for the last quarter, with Lampard acutely aware of Chelsea's poor home form.

Redmond did eventually prod home, when N'Golo Kante unwittingly sent the perfect ball into his path. The pacy forward diverted that loose pass beyond a stranded Kepa, and in doing so sealed a win to warm Saints hearts and put a chill into Chelsea chests.