Tottenham's investigation into the apparent racial abuse of Chelsea defender Antonio Rudiger has so far proved "inconclusive", but a Blues fan has been arrested for allegedly abusing Son Heung-min.

Germany defender Rudiger reported being the subject of monkey chants during the match against Spurs, the latest in a series of incidents at all levels of the game this season, and has led to the Professional Footballers' Association calling for a government-led inquiry.

Downing Street said that there remains work to be done by the football authorities to stamp out racism, but did not rule out "taking further steps if required".

Spurs launched an investigation in the aftermath of Sunday's 2-0 defeat but, in an update on Monday, said there has been little progress despite working with lip-readers and having reviewed hours of CCTV footage.

A club statement read: "We are able to track every fan via the cameras and have spent many hours reviewing CCTV footage.

"We have engaged lip-readers to study the footage and contacted Chelsea for further information from their players.

"We have also taken statements from other parties present at the time. The police will be reviewing our evidence alongside us. Please be assured we shall be exhaustively investigating this matter."

The statement continued: "At this time, however, we should point out that our findings are inconclusive and would ask that comment is reserved until the facts are established."

As well as investigating the alleged racist chanting from Tottenham supporters, the Metropolitan Police confirmed a Chelsea fan was ejected from the ground and arrested after committing a racially aggravated public order offence against Spurs forward Son. 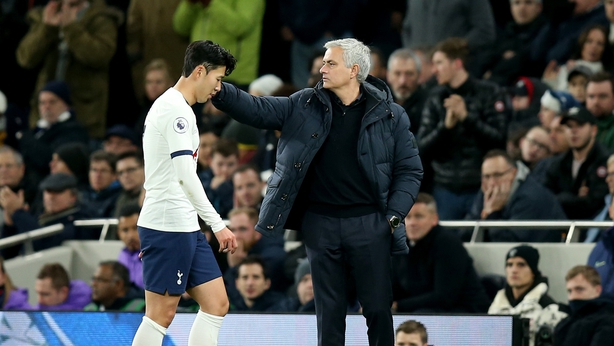 A spokesman for the Metropolitan Police said: "Police were made aware of alleged racist chanting during the second half of the Tottenham Hotspur vs Chelsea match on Sunday, 22 December.

"Officers will work with the club in an attempt to identify any people responsible."

The Metropolitan Police have made a total of six arrests as part of the matchday policing operation but none were directly linked to the incident involving Rudiger.

Anthony Taylor, the referee, stopped play after Rudiger claimed he had heard racist abuse and three announcements were made over the public address system.

Tottenham felt the multiple announcements "created a misconception that any issue was ongoing" and called on the Premier League to clarify its anti-racism protocols.

The organising body swiftly responded to Spurs' request on Monday evening by outlining its stance.

Step one of the protocol states that the incident must be brought to the attention of the referee, who would then report it to the home club's safety officer and police, via the fourth official.

"We need to eradicate any form of discrimination and in this case we are talking about racism. Football and society needs help."

The police and safety officer should then seek to identify anyone responsible and take appropriate action while the match continues, before removing players from the field if the problem continues.

Any announcements are "left to the judgement of the stadium's safety management and would usually only be made if it was believed necessary".

If the matter cannot be dealt with satisfactorily, then the referee should consider abandoning the match after consultation with the police and safety officer.

A Premier League statement read: "The Premier League uses a protocol specifically designed to support players, managers and match officials who believe they are being subjected to discriminatory abuse during a match.

"This protocol is intended to ensure that abuse is stopped and offenders dealt with efficiently by clubs and police."

The statement added: "The Premier League and our clubs will not tolerate discrimination in any form.

"If people are found to have racially abused Chelsea's Antonio Rudiger or Tottenham Hotspur's Son Heung-min they deserve to be punished.

"We will support Tottenham Hotspur FC and Chelsea FC in their pursuit of any perpetrators and call for appropriate action to be taken by the authorities and the clubs."

The PFA's equalities officer Iffy Onuora insists it is now time for the "warm words" to stop and firm action to start.

He has called for a government inquiry into racism in the game and the need for tougher criminal penalties for hate crime, citing the tough sentences handed down after the London riots in 2011 as a precedent for how a message could be sent out.

Ministry of Justice figures published in 2012 showed that a total of 1,292 offenders were jailed for their part in the trouble with an average custodial sentence of 16.8 months - more than four times the average term handed down by magistrates' courts for similar offences.

"I've seen decisions made on public policy, when they had the London riots and people were getting sentenced to 10 years and things like that, it was a policy decision to send a clear message," Onuora told the PA news agency.

"Well is that only relevant in those particular circumstances? If you threw a five-year jail sentence at someone like this, that's a deterrent right there.

"That's a strong message that you're not tolerating it, rather than warm words after the event."

Damian Collins, the MP for Folkestone and Hythe and who will stand for re-election as chair of the Digital Culture Media and Sport committee, wrote on Twitter: "Racist abuse must be driven out of football stadiums.

"A review on how we can do more to achieve this should also include stopping homophobic abuse and requiring social media companies to do more to prevent abusive attacks against players on their platforms."

Sports minister Nigel Adams called for racist behaviour to be confronted and said: "We will monitor how these plans are implemented before deciding on any further action in future."

The Football Association released a statement saying it was working with match officials, the clubs and the relevant authorities to establish the facts and take the appropriate steps.

Tottenham head coach Jose Mourinho, meanwhile, said that there was a wider issue of racism in British society that had to be addressed.

"Society needs help," he said on Monday. "Football is a micro-society.

"We need to eradicate any form of discrimination and in this case we are talking about racism. Football and society needs help."

Chelsea pledged to work with the authorities following the arrest of the Blues supporter, with the club promising the "strongest possible action" against anyone involved.

"We are aware of an alleged racist incident involving a Chelsea supporter at yesterday's match," said a Chelsea spokesman.

"Chelsea Football Club will not tolerate any form of racism, nor is there a place at this club for anyone who is found to have engaged in such behaviour.

"If a season ticket holder or member is involved, we will take the strongest possible action against them including bans.

"We will also support any potential criminal proceedings by the relevant authorities."