Frank Lampard insists he will not be calling Jose Mourinho "boss" in Sunday's London derby at Tottenham.

Chelsea chief Lampard revealed he still refers to the bulk of his former managers as boss out of respect, but conceded he cannot use that term for his Tottenham counterpart.

Former England midfielder Lampard explained he still holds his former Chelsea manager in the highest regard, but must treat the Portuguese as both equal and rival this weekend.

Lampard won two Premier League titles under Mourinho’s Chelsea tutelage and now the duo will square up amid derby intensity at the Tottenham Hotspur Stadium.

"I would always have big respect for all my managers; if I was to text or ring a manager, I’d always call them boss or gaffer, even when long gone," said Lampard.

"But when you go up against someone like that, so influential, I knew it was different. It was a good honour to go up against him (for Derby against Manchester United last season), but I wanted to beat him.

"It would be strange to call him boss now. Now I am an ex-player, on this side of the fence, I won’t be calling him boss.

"But that doesn’t take away from the respect I have for him. And it’s not the me and Jose show. It’s a game against Tottenham.

The former Real Madrid and Manchester United boss knew Blues supporters would not look kindly on his Spurs switch, and Lampard knows the fans could voice discontent this weekend.

Asked if he expects Chelsea fans to make their point to Mourinho, Lampard said: "If you go to the fiercest rivals, the fans will give the answer. That doesn’t mean they’ve forgotten the history or don’t respect it.

"Jose Mourinho is a manager who wants to work. He took that opportunity.

"Jose Mourinho won’t be too concerned about that, either. Look at the times he’s come back with United; it did look like (he doesn’t care).

"We know it’s a huge rivalry (between Chelsea and Tottenham). Probably, in my era, it became the biggest of the London derbies.

"It felt like that in the stadia and on the pitch. So possibly it is.

"Any rivalry, any local derby, ups the ante slightly. I remember that feeling, that eagerness to win and desperation not to lose. That’s how we all feel about it." 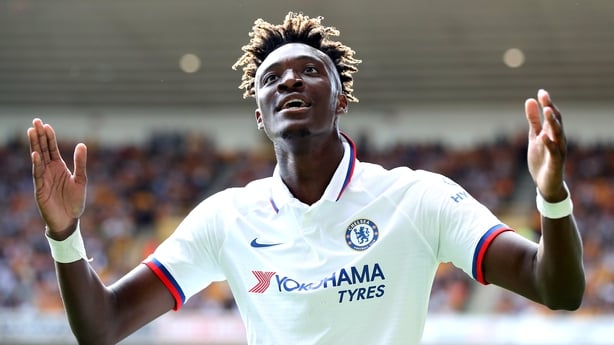 England strikers Tammy Abraham (above) and Harry Kane will go head-to-head in Sunday’s Spurs clash, with Lampard insisting Chelsea’s hitman can have no better role model than his Tottenham counterpart.

"There’s no better person for him (Abraham) to look up to in football than Harry Kane.

"Harry Kane is the all-round number nine, if not the best then close to being the best in the world. He should look up to that.

"I know he does, and is trying to take up the work ethic Harry has to try and be the best in the world.

"He will be different, but he can go really, really far following that kind of model."

Asked if Kane shows similar traits to him in his playing days, Lampard added: "Yes, from the outside, he does remind me of myself. He’s maximised every bit of his talent, or is maximising it.