New Liverpool signing Takumi Minamino admitted he has realised a dream to join the club but said he wants the fairy tale to continue by winning the Premier League and Champions League.

The 24-year-old Japan international, who impressed in two Champions League matches for Red Bull Salzburg against Jurgen Klopp's side this season, was announced as a Liverpool player on Thursday and is understood to have signed a four-and-a-half-year deal, taking him through to the summer of 2024.

He arrives for a bargain £7.25million after the Reds activated his release fee last week.

Minamino will officially become a Liverpool player on January 1 and will go straight into Klopp's squad, meaning he could be involved in the FA Cup third round tie at home to Everton on 5 January.

"It has been a dream, my dream to become a Liverpool player and I'm so excited that the moment has come true," he told Liverpoolfc.com.

"To play in the Premier League was one of my targets. I think this is the top-class league in the world.

"I was thinking if my career as a footballer progressed smoothly, someday I would be able to play in the Premier League.

"But I never thought I would be able to play in this team and I'm really happy about it. I'm looking forward to it.

"My target is to win the Premier League and the Champions League and to make good contributions to the team." 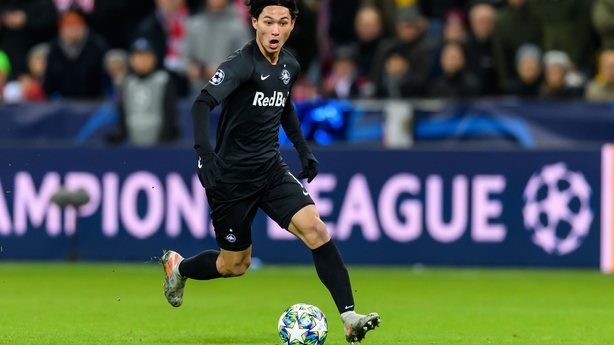 On his experience against Liverpool this season, Minamino added: "From those games I learned this team has such a high level of technique and intensity.

"Their football is of such a high level and I did feel that they were the champions of the Champions League.

"Feeling that, it makes me feel even happier that I can play in this team. I'm really happy to be part of that team."

While Minamino stood out in the two matches against Liverpool, his progress has been tracked over the last six years by the club's recruitment team, headed by director of football Michael Edwards who established a close relationship with Salzburg.

They became aware of his release clause and acted quickly when interest was expressed by Manchester United, Borussia Monchengladbach and AC Milan.

The deal is viewed by Liverpool as outstandingly good value as they believe the player's true market worth is three times what they are paying for him.

"This is fabulous news - a wonderful signing. We are really, really happy about this," Klopp said.

"Our supporters have had the chance to see him close up recently so I don't need to sing too loudly about his qualities as they are already known.

"Takumi is a very quick, very clever player, he finds space between the lines.

"He is brave with the ball but also brave without the ball - a proper team player. He makes the best of himself for the benefit of others.

"His Champions League experience is a big bonus and coming from the club and organisation he does, we know he'll be well coached, used to an elite environment and had all the right experiences.

"It is fantastic work by our football operations team in how they've handled this transfer. Michael Edwards and the team deserve a lot of credit."