Mikel Arteta is expected to take his place in the Manchester City dugout for the Carabao Cup quarter-final against Oxford as talks continue with Arsenal over their vacancy.

The City assistant coach has emerged as the strong favourite for the Emirates Stadium hotseat, with Arsenal chief executive Vinai Venkatesham pictured leaving the Spaniard's home in the early hours of Monday morning.

City boss Pep Guardiola, though, maintains it must be business as usual for the staff at the Kassam Stadium, with Arteta having been his assistant since joining the club in 2016.

"You know my opinion about Mikel. He's a professional human being and a person, I don't have doubts about that," Guardiola said.

"If he stays, I'd be happy, incredible, because we all work together really well - hopefully he can feel the same as me.

"If he decides to move, I'll wish him all the best; for him, his family and for his professional future."

Arteta played more than 100 times for Arsenal, which was the midfielder's final club before retiring.

City will not stand in Arteta's way should the 37-year-old wish to take the job.

However, the PA news agency understands the Premier League champions are not impressed with the conduct of Arsenal and will demand a seven-figure sum in compensation should the Spaniard leave. 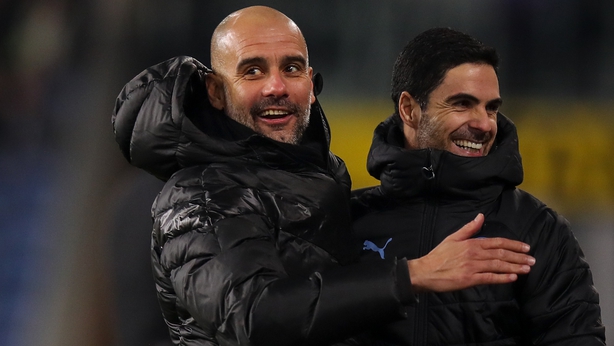 Guardiola, though, praised Arteta for his honesty over the situation, which emerged in the wake of Arsenal's 3-0 home Premier League defeat by City on Sunday.

"Mikel was honest with me," he said. "Arsenal, we were there two days ago. They were talking with our sporting director, the CEO, and didn't say anything.

"I don't know if the meeting was at one at night because they didn't want to make it public, but in the end it was public. I think Arsenal want to do the best thing as possible.

"Sometimes it's not easy to handle this kind of situation. We cannot deny that all the clubs around the world make behind the scenes the first contact, try to avoid the clubs that are in charge, they don't realise it and the media don't realise it, so that process is normal.

Guardiola added: "All I can say from what I'm concerned is that Mikel was clear with me and that's all. Perhaps there is a problem with the chairmen and the CEOs - they have to talk to each other."

Sunday's 3-0 defeat to City appears to have increased the urgency for Arsenal to end the uncertainty over the manager's position - with the north London club now as close to the relegation zone as they are to the top four.

The Swede, though, has won just one of his four league games at the helm, while the club are on an overall run of just one win from 12 games in all competitions.