It was a night of contrasting fortunes for Cork men Conor Hourihane and Caoimhin Kelleher in the Carabao Cup, with the former opening the scoring for Aston Villa in a 5-0 win over Kelleher's youthful Liverpool side.

Republic of Ireland midfielder Hourihane put the hosts ahead in the 14th minute when he whipped in a low free-kick from the right which eluded everyone, including Kelleher in the Liverpool goal.

The 21-year-old netminder may have been slightly unsighted by the onrushing Jonathan Kodjia as the ball ended up nestling in the bottom-left corner.

That goal came against the run of play, but Villa, who also fielded a weakened side, went on to record a comfortable win.

Liverpool defender Morgan Boyes looped the ball over Kelleher to make it 2-0, with Kodja bagging a brace and Wesley was also on target as Villa advanced to the semi-finals at the expense of a club, but not a team, who return to action on Wednesday evening when they face Monterrey in the semi-finals of the World Club Cup in Doha.

With Jurgen Klopp and his entire first-team squad in Qatar, it was an unrecognisable Liverpool side that took to the Villa Park pitch, comprised entirely of academy players, and with five making their senior debuts in the youngest Reds line-up in the club's history.

With an average age of 19, and under the guidance of Under-23 coach Neil Critchley, Liverpool's youngsters started brightly against a lethargic Villa and came close to embarrassing the more hardened professionals in front of them.

Villa were indebted to goalkeeper Orjan Nyland, initially pulling off a one-handed save to deny a certain star of the future in Harvey Elliott, and then using his left leg to divert wide a toe-poked effort from Herbie Kane.

Against the run of play Villa, showing 10 changes to the team beaten 2-0 by Sheffield United in the Premier League on Saturday, grabbed the opener in the 14th minute through dead-ball specialist Hourihane. 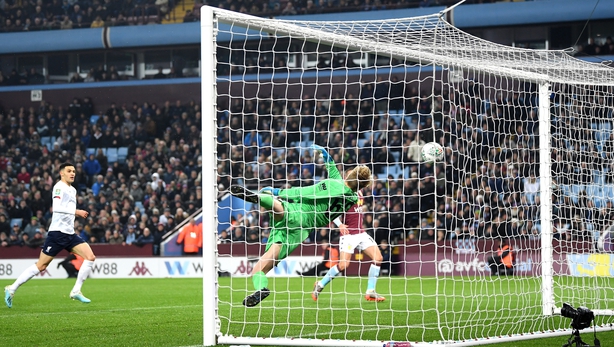 Three minutes later Liverpool found themselves two goals down, and cruelly so as Ahmed Elmohamady's cross from the edge of the box nicked off the boot of the unfortunate Boyes, with the ball sailing over Kelleher.

Credit to Liverpool as they continued to create, with Nyland again saving his side with a tip over to Isaac Christie-Davies' volley after brilliant footwork and a neat chip from Elliott had played in one of the debutant quintet.

It was two goals from Kodjia in the final eight minutes of the first half, though, that killed off the visitors' challenge.

The striker's first was a deft flick past an advancing Kelleher after Jota had teed him up for his first goal since May.

The second was a sidefoot finish from six yards that was the culmination of an incisive move involving roving winger Jota and Elmohamady.

After Nyland had conjured another stunning save to deny Kane in the 54th minute, Trezeguet had three chances to add a fifth for the home side.

Sepp Van Den Berg initially cleared the first goalbound effort, with a second chance flicked over the bar, while the third was superbly saved by the outstretched left leg of Kelleher, who also beat away a stinging 18-yard drive from Henri Lansbury.

After one final piece of heroics from Nyland to thwart Tony Gallagher from 22 yards to preserve his clean sheet and deny Liverpool the goal they arguably deserved for their never-say-die spirit, Villa netted their fifth in added time.

Wesley, who had replaced Kodjia in the 73rd minute, ran on to a through ball from Trezeguet before coolly stroking it past the onrushing Kelleher.