Arsenal interim boss Freddie Ljungberg called for clarity regarding the managerial position at the club following a chastening 3-0 defeat at home to Manchester City.

Kevin De Bruyne struck a first-half brace for the Premier League champions and also set up Raheem Sterling to help Pep Guardiola's team cruise to three points at the Emirates.

It was another disappointing afternoon for the Gunners and Ljungberg, who has overseen five matches in charge since Unai Emery was sacked, has urged the board to make a decision.

Academy manager Per Mertesacker is supporting the Swede in the dugout, but Arsenal have only triumphed once under their interim boss.

Ljungberg said: "I think I've said to the club, for me it is a great, great honour to do this, but Per is an academy manager and he is doing two jobs in one go and I've said I think it needs to be cleared up so everybody knows.

"That is something I've said, but it is totally up to the club. I'm very honoured and I've tried to do things as good as I can, but I think as well it would be good to make a decision regardless of what it is." 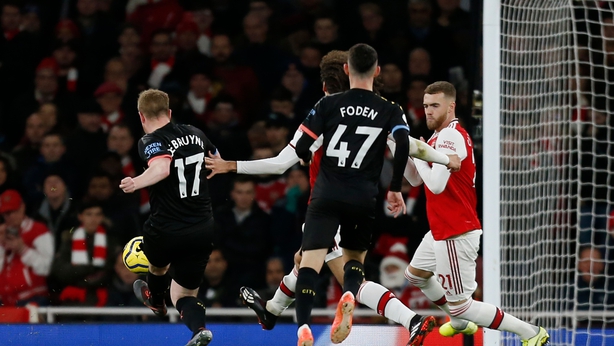 City were two up inside quarter of an hour, with De Bruyne pulling the strings before he added a sublime second five minutes before half-time.

The third consecutive home defeat for Arsenal in all competitions leaves them seven points off the top four and the exact same number of points off the bottom three.

"Of course it is not where we want to be, to have won one game in 11 and we all have to look in the mirror," Ljungberg added.

"What I felt was the West Ham game was a big step in the right direction. I haven't seen that from a team of ours for a long, long time where we were much better than the opponent, played good football and we could have been 4-1 or 5-1 up.

"Today we played a top, top side and they are better than us. That's just a fact and I don't think anyone before this game thought anything else."

Ljungberg also promised to "deal with" Mesut Ozil after the midfielder responded to being substituted by kicking his gloves away in frustration.

"For me I took Mesut off because I wanted some more energy in the team," Ljungberg told Sky Sports. "I thought Emile did really well when he came in.

"How he reacts is up to him and I'll deal with it. We'll see what it means for the future but of course we want players to behave the right way."

Guardiola's assistant Mikel Arteta captained Arsenal during his playing career and has been mooted as a future Gunners boss.

But the City manager said: "I spoke many times, he is part of our group and an important person, but what will happen I don't know."

This three-goal victory for the visitors cut the gap to leaders Liverpool to 14 points, with De Bruyne the star of the show.

Guardiola described the Belgian as "extraordinary" before adding: "It was a nice game and we won it. Kevin made two incredible goals and one assist. I am happy for the three points.

"He sees passes and actions that normal human beings cannot see. Having a special vision and his assists, I always say you have to score more goals.

"Always we speak to him about that and today he scored two incredible goals."