Gabriel Jesus admits he has been affected by the weight of expectation at Manchester City and suffered in comparison to the prolific Sergio Aguero.

But the 22-year-old feels he is now learning to live with the pressure of being expected to score goals.

That showed as he grabbed a hat-trick - taking his career goal tally for Palmeiras, City and Brazil to 101 - as the Premier League side brushed past Dinamo Zagreb 4-1 in the Champions League on Wednesday.

After an eight-game scoring drought, he has now netted five times in three games since taking over as sole striker in the absence of the injured Aguero.

Jesus said: "Honestly, last month I was no good and I wasn't happy. I played nine or 10 games and I didn't score and I missed chances. When this happens of course I cannot be happy.

"Sometimes football is like that. You have to keep working hard and try to score, try to help the team and work and that's what I have done.

"When I have the chance sometimes I miss because I think too much and put too much pressure on myself. I try, I'm getting better. I'm working to score and don't think about the pressure." 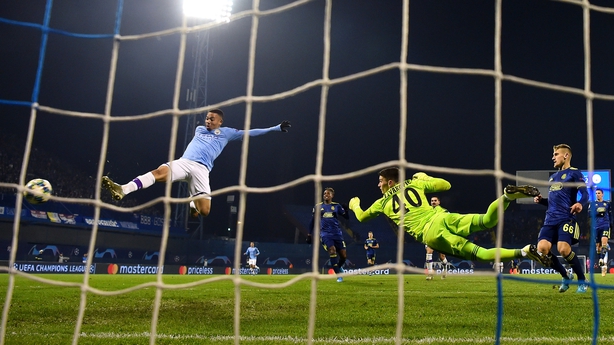 City's victory on a freezing night in Zagreb saw them wrap up their Group C programme in style. They had already secured top spot and a place in the last 16 but they have now gone unbeaten through a group stage for the first time.

They were stunned early on by their Croatian hosts, who still harboured hopes of progressing, as Dani Olmo struck a superb opener on 10 minutes.

However, Jesus headed in a Riyad Mahrez cross to level before the break and then struck twice more early in the second half. Phil Foden, City's other outstanding performer on the night, also got on the scoresheet late on.

It was a good reaction from City, who made eight changes, after last weekend's damaging loss to Manchester United in the Premier League.

With uncertainty over when Aguero will be fit to return from a thigh injury, Jesus could again lead the line against Arsenal on Sunday.

He hopes to maintain his form and is being spurred on by a desire to emulate Aguero, City's record goalscorer.

Jesus said: "I try all the time to do my best. Sometimes I cannot do it and that's the way (it is) but it's important for me to score goals and keep scoring goals because I have to.

"I'm at a big club and play with big players. I'm in a single competition with Sergio, a friendly competition. I hope that when he plays he scores. I always want him to help the team and his team-mates.

"But when I play he does the same, which is amazing. I have to learn from him because he's scored a lot for the club and throughout his career.