Manchester City have said they are "aware of a video circulating on social media which appears to show a supporter making racial gestures" during their match against Manchester United.

The club also said they are "working with Greater Manchester Police in order to help them identify any individuals concerned".

The alleged incident occurred in the second half of City's 2-1 defeat at the Etihad as a supporter appeared to make a monkey gesture towards a United player.

A City statement after the game read: "Manchester City FC are aware of a video circulating on social media which appears to show a supporter making racial gestures during the second half of the match against Manchester United this evening.

"Officials from the club are working with Greater Manchester Police in order to help them identify any individuals concerned and assist with their enquiries.

"The club are also working with GMP regarding an instance of objects being thrown onto the field of play.

"The club operates a zero tolerance policy regarding discrimination of any kind, and anyone found guilty of racial abuse will be banned from the club for life."

English football's equality and inclusion organisation Kick It Out said it had been "inundated with reports of alleged racist abuse from a number of individuals" during the game.

It added: "We will be contacting both clubs to offer our support and hope swift action is taken to identify the offenders."

United goalscorer Marcus Rashford, when asked about apparent missile-throwing from City fans and other off-field incidents, told Sky Sports: "No, (I was not aware) of it in the game.

"But it can happen and in recent times we have been dealing with it a little bit better but the fact it's still happening isn't good enough.

"There's obviously work still to do in that area but for us it's about the football and trying do our best on the pitch." 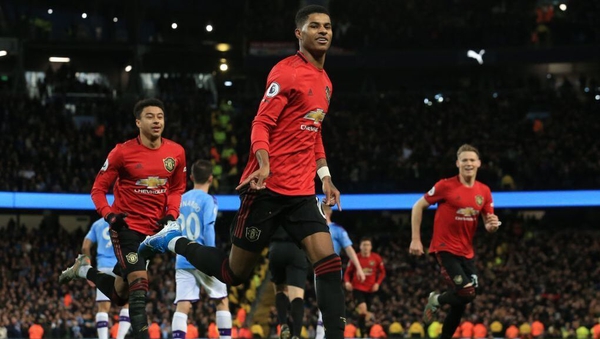 City title hopes in tatters after derby loss to United