Minister for Sport Shane Ross has described the FAI as a "complete and utter mess" but insists it is "too early" to be discussing the possibility of a government bailout for the cash-strapped association.

The FAI today disclosed that the organisation has current net liabilities of more than €55m and auditors Deloitte are unable to guarantee that the governing body can continue as a going concern.

The association has been in discussions with UEFA, as well as their banking partners since the end of 2018 in an effort to provide financial stability within the organisation.

Ross repeated that state funding will not be restored until there is a complete change at the top of the FAI, describing the situation as a "complete and utter mess" adding that it appears that the association is on "life support" from UEFA.

It looks to me like they are on life support from UEFA. That is a situation obviously that can't go on forever.

"The most horrific element of this is the fact there is €55m [net liabilities] and what it shows, as some of us anticipated, is that this is a shambles and it has been shambolic for a very, very long time," he told RTÉ.

"It has been run without any proper governance. It fulfilled our worst fears. We are going to be paying for it for a long time.

"It looks to me like they are on life support from UEFA. That is a situation obviously that can’t go on forever.

'The most horrific element is the fact there is a €55m debt and what it shows us, as some anticipated, is that this is shambles and it has been shambolic for a very long time' pic.twitter.com/2h5ntlx4Ju

"Today is rock bottom, an unthinkable situation, but let’s hope it is the beginning of real reform in the FAI. There is a lot more to be done, but we are coming closer to a clean out of the board, which I think is essential. It is a shame it didn’t happen earlier."

Ross was asked whether the government may be forced into a bailout to save the FAI.

"It’s much too early to even contemplate anything like that," he said.

"The one thing the government is certainly not going to be pouring money down a black hole. You have a €55m [net liabilities].

.@Corktod reports on another turbulent day within the FAI as the full extent of net liabilities is revealed pic.twitter.com/sREe7wCLrb

"We don’t know how it arose and I don’t think anybody would come in and expect us to come in and fund a black hole because we might be pouring good money after bad.

"We don’t want to just come in and say, 'look, this €55m gap, we are going to do something about it’. This is a complete and utter mess. It has got to be examined and we have got to find out the reasons it has happened and what kind of plan the FAI has to get out of it.

"What I would say is that the government is very keen to resume the €2.9m funding which we have withdrawn because we want to see football supported." 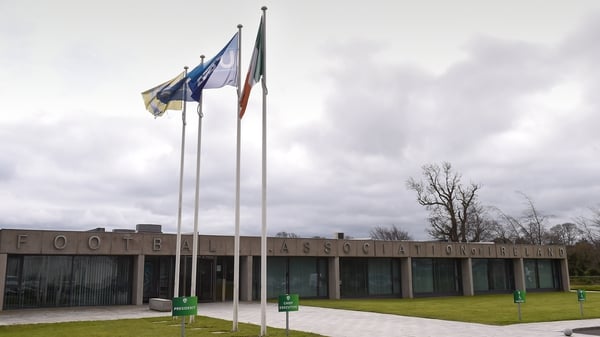