Italian daily Corriere dello Sport has been accused of fuelling racism with its front page headline in Thursday's edition of the newspaper.

The paper ran the headline 'Black Friday' alongside pictures of Inter Milan's Romelu Lukaku and Roma's Chris Smalling. The two former Manchester United team-mates will face each other in Friday's Serie A meeting between the two teams.

The anti-discrimination Fare network tweeted a picture of the front page along with the message: "The media fuels racism every day."

Serie A has been plagued by racist incidents this season, with Lukaku himself and Brescia forward Mario Balotelli among those to make allegations of being racially abused by supporters during games.

Only last week all 20 clubs in Italy's top tier signed an open letter which called on "all those who love Italian football" to unite to try to eradicate its "serious problem with racism". 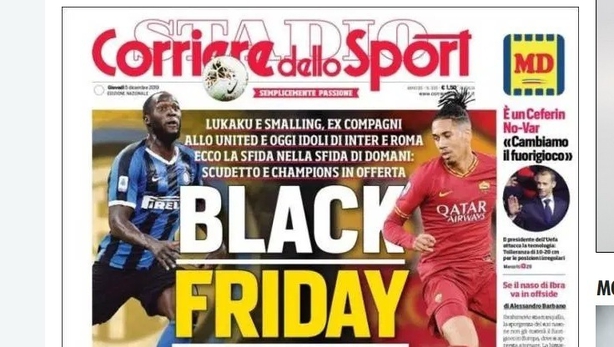 Above its headline, Corriere dello Sport ran a subhead which read: "Lukaku and Smalling, former team-mates at United - and today idols at Inter and Roma - go head to head tomorrow: the Scudetto and Champions League football are up for grabs."

In the article the newspaper appeared to attempt to highlight the league's racism problem.

"In the faces of those idiots who boo, tomorrow everyone must instead go 'oooh' like children. It will be a Black Friday, but this is not an end-of-season sale," the article said.

It went on to describe Lukaku and Smalling as "two giants of colour".