Liverpool striker Divock Origi continued his love affair with the Merseyside derby and his two goals in a 5-2 win may well have spelled the end for beleaguered Everton manager Marco Silva.

While Jurgen Klopp's side maintained their eight-point lead at the top of the Premier League with a 14th victory in 15 matches, the Toffees slipped into the bottom three as their winless run at Anfield extended beyond 20 years.

Origi, last year's late hero, took his tally to five goals in four Anfield derbies and, with surprise inclusion Xherdan Shaqiri and Sadio Mane also on the scoresheet, replies from Michael Keane and Richarlison made it the highest-scoring half in the history of contests between these two.

The second half could not match those heights but Georginio Wijnaldum's 90th-minute strike sent Everton fans streaming for the exit with chants of "going down" and "Liverpool, top of the league" ringing in their ears.

Klopp sprang a surprise by leaving out Mohamed Salah and Roberto Firmino and handing a first Premier League start since January 30 to Shaqiri, who had played just 25 minutes of football this season because of a calf injury.

While it was definitely a second-string attack it was the same front three which featured in the 4-0 Champions League semi-final second-leg win over Barcelona in May - and Origi certainly took inspiration.

With Southampton winning by the time the game kicked off at 8.15pm, Everton had already dropped into the bottom three before proceedings got under way.

It took six minutes for their misery to increase as Mane's brilliant through-ball saw Origi take out Keane and Yerry Mina, two of three centre-backs, and goalkeeper Jordan Pickford with one touch before rolling a shot into an empty net. 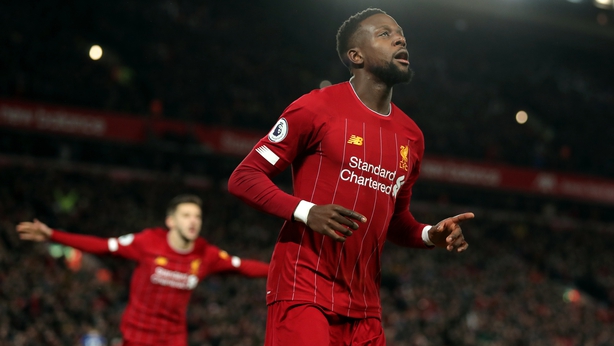 The quality of the Liverpool goals kept getting better, however, and when a raking crossfield diagonal from Trent Alexander-Arnold picked out Mane he cut inside and rolled a cute reverse pass into the path of Shaqiri who clipped home.

It appeared Everton were about to self-destruct with Tom Davies and Keane, and Djibril Sidibe and Mason Holgate, arguing with each other.

They put aside those squabbles to pull one back when Keane scored from close range after Dejan Lovren failed to adequately deal with Alex Iwobi's cross, ensuring a 12th home game without a clean sheet for Klopp's side.

Dominic Calvert-Lewin felt he should have had a penalty when he was forced to fire into the side-netting under pressure from Virgil Van Dijk, while the derby feel was further enhanced with Andy Robertson catching Davies in the head.

Mane's penalty claims were waved away after a challenge by Sidibe, who lasted long enough to see Lovren's 40-yard pass expertly controlled with one touch and lifted over Pickford with the second by Origi.

Silva, probably thinking he may as well go out in a blaze of glory, immediately replaced Sidibe with Bernard and switched to 4-4-2, although it was not enough to prevent a fourth.

Everton were exposed at their own corner and, despite having a two-on-one with Shaqiri, Alexander-Arnold, having raced down the left, cleverly delayed his pass long enough for Mane to get alongside him and sweep home left-footed.

That would probably have done for Silva but Richarlison's diving header - making it the most goals scored in any half of a Merseyside derby - just before the break offered the Portuguese the hope of something to work with.

However, the second half had very little of the gloss of the first with Mane missing two one-on-one chances he would normally have buried.

Substitute Moise Kean wasted Everton's best chance of the half late on before Wijnaldum delivered the killer blow as the hosts racked up a club-record 32 league games without defeat with Klopp's 100th league win as manager in just his 159th game.

They may well have done the same to another arch-rival in Silva, who has just two wins in his last 11 matches.