For the second successive Premier League match, United got themselves into a winning position only to allow their opponents to claw back a goal to earn a point.

Aston Villa followed Sheffield United in bouncing back - having initially gone ahead - to salvage something with Tyrone Mings benefiting from a lack of communication to spring the offside trap and volley home to make it 2-2 at Old Trafford on Sunday.

It left the Red Devils in ninth place with 18 points from 14 matches, their worst return at a similar stage since 1988-89, and centre-back Maguire knows it could have been so much better.

"We got ourselves in a great position in the second half and again conceded a sloppy goal really," the England international told MUTV.

"But it's disappointing because we got ourselves in a good position after the first half wasn't good enough.

"As a defender especially, it's frustrating. We haven't really conceded many chances or goals prior to the last two games and then we've conceded five.

"The attackers have scored five and we've ended up coming away with two points.

"It's disappointing, especially as a defender. It's something that we'll work on but it's not like we were conceding lots and lots of chances (against Villa).

"I felt every time we went forward in the second half, we were going to score. We caused them numerous problems.

"The first half wasn't good enough but the second half was better but it's disappointing to draw at Old Trafford." 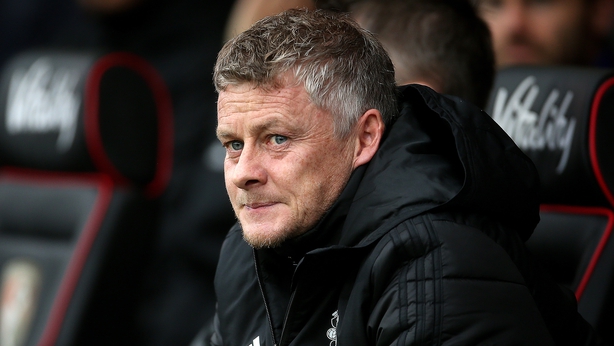 Things will not get any easier for United boss Ole Gunnar Solskjaer (above) as their next two matches see Jose Mourinho return to Old Trafford for the first time since he was sacked a year ago with a resurgent Tottenham side before they make the short trip to neighbours Manchester City.

Solskjaer has to find a way to turn draws into wins having managed just six victories in 22 league matches since being appointed permanent manager in March.

By contrast Mourinho has won his first three games at Spurs - predecessor Mauricio Pochettino managed just five victories in 17 fixtures before he was sacked.

Maguire believes the quick turnaround from Sunday to Wednesday may actually help United after their recent disappointments.

"It's perfect. When you don't win any football match you want a game as soon as possible to put things right," he added. "And there's no better way than to play Tottenham here at Old Trafford."

On several occasions against Villa the ball flew through the penalty area with no United player anywhere near and Solskjaer admits the lack of a real goal poacher is costing them.

"We created chances (for someone) to be stood three yards away from goal and tap it in," said the Norwegian.

"Dan (Daniel James) created chances, Juan (Mata) created a decent chance. We have players who score worldies but if you give yourself those four or five extra goals a season it will get us points and give them confidence.

"But we are working on this. It's not like they stand outside the box thinking 'the ball's not coming in'."
Solskjaer is hopeful of having one of midfielders Paul Pogba or Scott McTominay available soon.

He said: "Let's see. Hopefully we can see one of them on the pitch but they are working hard behind the scenes."