The Hoops had already qualified for the last 32 of the competition but boss Neil Lennon had stressed the importance of winning a group for the first time to ensure the possibility of a more favourable draw.

Makeshift centre-forward Lewis Morgan, in for absent French striker Odsonne Edouard, fired the home side ahead in the 22nd minute with Ryan Christie doubling that lead just before the interval.

Second-half substitute Mikey Johnston, on for James Forrest for his first appearance since September after recovering from injury, drove in a third in the 74th minute before Rennes substitute Adrien Hunou headed in a late consolation.

Lennon's side moved on to 13 points - the first time they have broken the 10-point barrier - and with Cluj losing 1-0 to Lazio in Rome, pole position is guaranteed before the Hoops travel to Romania next month for the final group fixture.

There had been plenty of discussion around Celtic's decision to partially close a section of the ground which holds their ultras, Green Brigade, after one too many fines by UEFA for various forms of misbehaviour.

However, those who remained, as well as the rest of the Hoops fans and around 2,500 Rennes supporters, created a vibrant atmosphere. 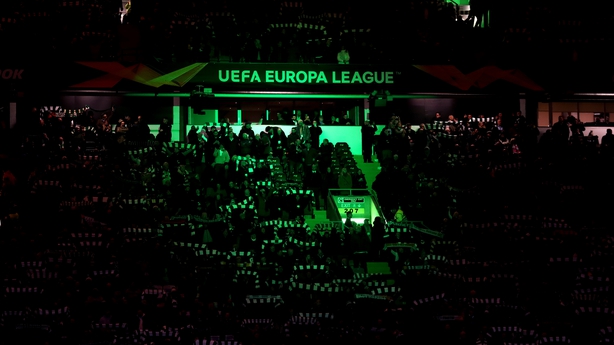 While Morgan took over from Edouard, who was given the night off, left-back Greg Taylor, right-back Moritz Bauer and midfielder Olivier Ntcham also came into the side against a Rennes team who arrived in Glasgow without hope of qualifying and with only one point.

Amid a tepid start to the match, Romain Del Castillo tested Celtic goalkeeper Fraser Forster with a shot from distance in the sixth minute, before Ntcham did the same at the other end, his long-range effort pushed wide by Edouard Mendy.

However, the Rennes keeper had no chance when Forrest's pass from the left was pounced on by Scotland colleague Morgan, usually a winger, and he swiped the ball past him at the near post from 10 yards.

The Scottish champions were up and running and another powerful low drive from Ntcham required a good save from Mendy.

Morgan got on the end of a terrific cross from the right by Bauer in the 41st minute but his header was straight at the Rennes keeper, who looked unconvincing when he was beaten again seconds before the interval.

Christie drifted inside from the right and fired in a left-footed drive from outside the box.

Celtic had a let off in the 57th minute thanks to the remarkable reflexes of Forster, who made a double save from point-blank range, first from Rafik Guitane and then fellow forward Theoson Siebatcheu, with the ball clipping the outside of a post after coming off his knee.

There was a penalty claim when Morgan was tackled from behind by Mendy but referee Espen Eskas waved play on and as Celtic dropped their guard further, Forster made further saves from Christ-Emmanuel Maouassa and James Lea Siliki.

Johnston, who took over from Forrest after 63 minutes, grabbed a third goal seven minutes later when he played a one-two with Ntcham before rifling an angled drive into the far corner of the net.

Hunou, on for Del Castillo, headed a cross from Maouassa past Forster in the 88th minute but it should not dent the confidence of the Hoops, who can prepare for Romania with no pressure - a rare position for any Scottish club to enjoy.

Lazio's 1-0 win over Cluj means Celtic will avoid playing a Champions League club in the next round.