Paris St Germain fought back with two late goals to earn a dramatic 2-2 draw at Real Madrid in their Champions League clash at the Bernabeu.

After Brugge had drawn 1-1 at Galatasaray in Tuesday's earlier kick-off, Los Blancos were already secure of qualification to the knockout stage from Group A.

Real Madrid looked to have then been coasting towards a comfortable win over the previously unbeaten French side, as in-form forward Karim Benzema scored in each half.

However, PSG will have felt justice was done in the end after earlier seeing a penalty and Courtois' dismissal chalked off by Portuguese referee Artur Dias for a foul in the build-up having watched replays on the pitchside monitor.

Kylian Mbappe pulled a scrappy goal back 86 seconds after Benzema put Real Madrid 2-0 ahead in the 79th minute before substitute Pablo Sarabia lashed in a dramatic equaliser.

Captain Sergio Ramos headed an early chance over following a corner as Real Madrid looked to make a fast start.

In the 13th minute, Mbappe darted away on the right and cut a hanging cross back across the six-yard box, but Mauro Icardi could not keep his header down.

At the other end, Kroos carved out some space 20 yards out for an angled drive which flew just over.
With the rain now lashing down, Real Madrid swept into the lead after 17 minutes.

Dani Carvajal fed Raphael Valverde on the overlap down the Madrid right.

The defender's low cross was met by Isco, whose low shot cannoned back off the base of the post - but in-form striker Benzema was on hand to slot home the rebound.

PSG had not conceded in any of their four previous Champions League matches, but almost fell further behind when Benzema's close-range effort was blocked by PSG keeper Keylor Navas.

The former Los Blancos number one, who moved to Paris in the summer, had to be alert again after 25 minutes to beat away a rising drive from Kroos. 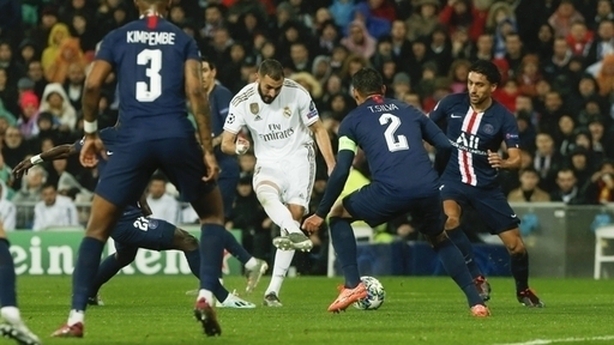 As half-time approached, PSG thought they had been awarded a penalty and seen Courtois shown a red card for bringing down Icardi just inside the box.

However, after referee Dias had brandished the red card, there was a check by VAR.

The Portuguese chose to take a look at the pitch-side monitor, quickly deciding Idrissa Gueye had pushed Marcelo in the back and promptly chalked off the penalty and Courtois' dismissal to award Real Madrid a free-kick instead.

Both the PSG players and manager Thomas Tuchel were left in utter disbelief, as Real continued with 11 men still on the field.

Brazil forward Neymar, who started the 2-0 win over Lille on Friday, replaced Gueye for the second half.

Navas was having a busy night, and saved from Benzema before Isco's near-post flick was blocked by his former team-mate.

Eden Hazard looked to have picked up an ankle problem and was replaced by Gareth Bale in the 68th minute - the Wales forward receiving a more warm reception than when making a return from his injury lay-off as a substitute against Real Sociedad on Saturday.

French forward Benzema, who had scored five in his past three games, looked to have wrapped things up when he headed in Isco's cross at the back post.

Mbappe, though, capitalised on a mix-up between Varane and Courtois to knock in a low cross, before Sarabia lashed in a deflected cross to stun the hosts.

Bale - embroiled in another country-versus-club row over the international break - almost snatched a winner in stoppage time when his curling free-kick hit the post.