Napoli face a key Champions League match away to Liverpool on Wednesday and there is no end in sight to the turmoil at the club, where the directors still appear to be at loggerheads with boss Carlo Ancelotti and his players.

The Gazzetta dello Sport said on Monday that club president Aurelio De Laurentiis was set to fine his players one quarter of their monthly wages after they broke off a week-long training retreat this month, described by Italian media as a mutiny.

The newspaper added that midfielder Allan, a lynchpin of the side over the past five seasons, would be fined half his salary while the players were also consulting their lawyers.

The problem blew up after Di Laurentiis ordered widely-disliked 'ritiro' - a training camp where the squad are confined to a hotel - following a 2-1 loss to AS Roma on 2 November.

The players refused to return to the camp following a Champions League match against Salzburg four days later, prompting the club to announce legal action against them.

A media silence imposed by the club is now entering its third week and Ancelotti and his players again refused to talk to reporters following their 1-1 Serie A draw at AC Milan on Saturday which extended their winless run to six games in all competitions.

Under UEFA rules, Ancelotti is obliged to give a news conference in Liverpool the day before Wednesday's match but there was no indication on Monday that the club were prepared to lift the embargo. 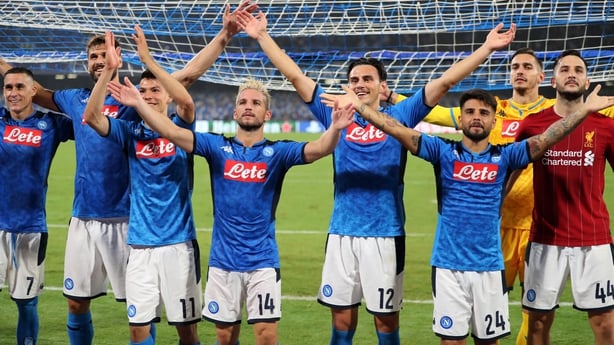 Napoli's website has given only minimal details on training sessions and ticketing information for supporters but no quotes from the squad, meaning the only news has come from leaks to the media.

The muted celebrations which followed Hirving Lozano's goal against Milan on Saturday, added to a generally lacklustre display, suggested that morale is still at a low. Only a couple of players went over to congratulate the Mexican and the rest went straight back to the centre circle.

Former Juventus coach Massimiliano Allegri was spotted in the stands at San Siro on Saturday, leading to the inevitable speculation that he is being lined up for the Napoli job should they lose to Liverpool.

Amid the chaos, Napoli, who began the season with the stated aim of ending Juventus' run of eight successive Serie A titles, have now dropped to seventh and, if the slump continues, will finish outside the top five for the first time since 2010.