Gianni Infantino is confident Qatar will deliver a "discrimination-free" World Cup when it gets under way in three years' time.

Football's showpiece event will kick off at the Lusail Stadium in Doha on 21 November, 2022, and all eyes will be on the Gulf state after more than a decade of debate and controversy.

One area of major concern has been how such a conservative country will welcome LGBT supporters. Qatar 2022 organising committee chief executive Nasser Al Khater has stated that public displays of affection are "frowned upon" in the country, but insists that applies to people of all genders and sexual orientation.

But just as the 2018 World Cup in Russia was not blighted by racism as many had feared beforehand, so FIFA president Infantino believes Qatar will be an "inclusive" experience.

He said: "Every single fan will be welcome and this is not only the FIFA president saying that, but a full commitment made by our partners in Qatar.

"In accordance with our statutes and policies, it is our responsibility to ensure a discrimination-free World Cup and in the past years we have been working, together with Qatar's Supreme Committee for Delivery and Legacy, on a list of measures that will ensure an inclusive experience for everyone.

"There were also questions ahead of the World Cup in Russia and we did not hear of a single case of discrimination - a positive outcome that resulted from the work done ahead of the event and the ability that the World Cup has to bring people together. " 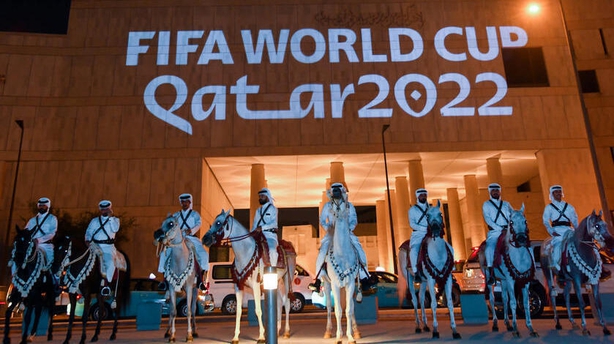 The run-up to the tournament has been dogged by allegations of corruption in the bidding process, and the decision to move the event to the European winter to avoid 40 degrees-plus temperatures in Qatar's summer is forcing a rewriting of domestic calendars for the 2022-23 season at least.

Infantino insists that decision was taken with player welfare in mind.

"The change in the dates is to guarantee something that is of utmost importance for us - the well-being of the players," he added.

"Since then the match calendar has been adopted in consultation with the international football community and we will continue to work together to address challenges.

"It is also important to remember that the calendar is different in other parts of the world, or that fans in the southern hemisphere will also have for once the chance to enjoy World Cup public viewings and celebrate in the streets when it's summer for them."

Infantino believes 2022 will be a unique World Cup experience, and sees the fact that all the action will be centred in the capital Doha as an advantage for players, fans and media. There were criticisms over the size of the crowds during the World Athletics Championships in the city earlier this year, but Infantino believes the local community will be "completely taken" with the World Cup.

"This will be a World Cup of firsts - the first to be held in the Arab world, in a Muslim-majority country, in the most compact area since the inaugural edition in 1930 (which was played in Uruguay)," Infantino added.

"There is so much culture, history, natural and man-made attractions in this region; but, most importantly, love for the game. I am sure that at the end of the tournament we will be talking about how this World Cup helped change perceptions and opened the door to a fascinating part of the world.

"Doha will be completely taken by this joyful, thrilling World Cup atmosphere, with matches, entertainment and accommodation all concentrated in a small area, allowing fans to enjoy their experience to the fullest, including watching more than one match on the same day.

"For the teams, not having to travel between host cities will mean more time to rest and train, leading to even better performance on the pitch. I can't wait."