Ireland remained top of Group I in their Euro Under-21 qualification campaign following a comprehensive 4-1 victory over Sweden at Tallaght Stadium.

The visitors led at the break, but it was a different Ireland side that emerged for the second period and goals from Lee O'Connor, Adam Idah, Troy Parrott and Zach Elbouzedi secured a well-deserved win and three valuable points.

Having been involved in the drama of the Euro 2020 qualifier at Lansdowne Road on Monday, Parrott returned to Under-21 duty to start the game, alongside fellow senior debutant Lee O’Connor who also played against New Zealand on Thursday night.

Sweden took the game to Ireland early on and with less than two minutes on the clock, there was a strong penalty appeal for the visitors as Viktor Gyokeres capitalised on some slack Conor Masterson defending and got to the ball first before the Irish defender appeared to kick him, but the referee waved away the appeal.

But Ireland got their game going with captain Jayson Molumby and midfield partner Conor Coventry dominating play, allowing the front four to get more involved in the opposition half.

An evenly matched affair in the opening 15 minutes, but it was Sweden who took an early lead thanks to a fine individual effort from Viktor Gyokeres.

The stylish striker worked the ball in from the left flank following a long hopeful ball over the top. 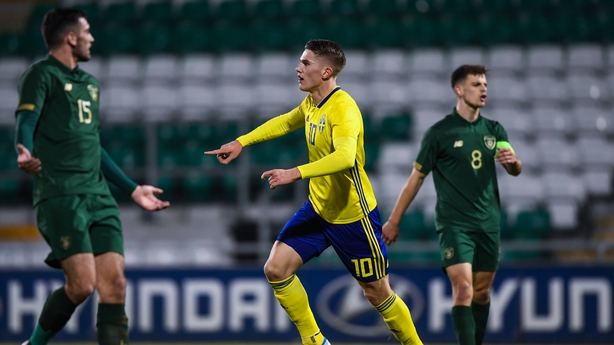 Gyokeres skipped inside Masterson, far too easily from a defensive perspective, before unleashing a fine curling effort, hit with real pace low to the far corner giving Gavin Bazunu no chance of saving.

It took 28 minutes for Parrott to get into goalscoring range and following some neat footwork inside the box, the goal appeared to open up for him to test the keeper, but he opted to square the ball inside to Knight, but Sweden cleared.

Still the scoring chances remained at a minimum with Sweden’s best effort coming in the 35th minutes from a speculative Jake Larsson effort from distance, that flew well wide.

Lee O’Connor was trying to get up the right flank at every opportunity and his endeavours led to an Irish corner eight minutes from the break. 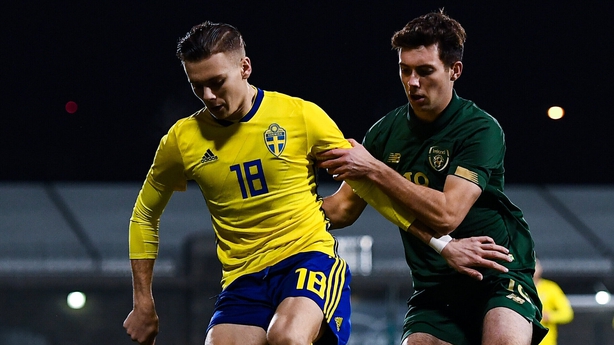 Sweden cleared and countered before O’Connor was back sweeping up and he then sent Parrott racing down the left.

The Spurs striker powered past his man, cutting in off the flank and then squared an inch-perfect ball into the path of the arriving Idah.

The Norwich striker hit it first time, trying to whip it into the near post, but the ball flew the wrong side and rippled the side netting.

A lapse in concentration from Nathan Collins almost gifted Sweden a second as his under-hit pass inside was intercepted by Daleho Irandust who raced on goal and hit a low effort on target. 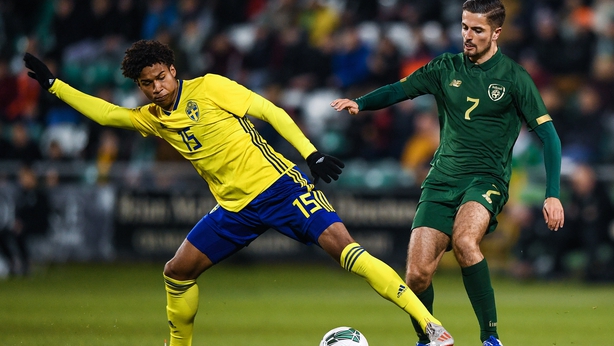 Bazunu was well-placed, however, and got down well to his right to keep the deficit at a minimum.

And then just a minute before half-time Larsson smashed a first-time effort into the side-netting following a clever short free-kick into the box from Irandust.

Invigorated after the break, Ireland raced out of the blocks, putting immediate pressure on the Sweden defence, with substitute Conor Ronan now slotting into that number 10 role with Parrott pushed outside to the left.

And it took less than five minutes for Ireland to make a telling impact as Lee O’Connor started and finished a move to restore parity.

A great ball down the right saw Idah use his power and pace to cut down to the byline before a perfect drag back into the path of the arriving Celtic man. 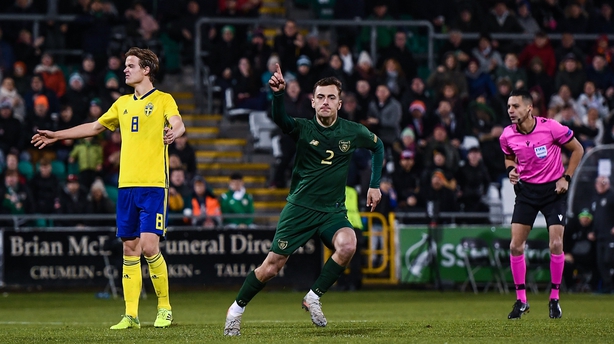 Right-footed, O’Connor whipped the ball into the far corner, leaving the Swedish stopper Pontius Dahlberg little chance of stopping it.

Buoyed by the goal, Ireland started to dominate and Idah should have connected with a fine Elbouzedi cross from the right in the 59th minute, which appeared perfect for the striker to attack.

However, the header was mistimed and the ball glanced well beyond the far post.

But the hard-working forward was not to be denied four minutes later as the same combination led to Ireland’s second goal.

This time Elbouzedi worked the ball to the byline before sliding it back into the path of Idah who helped the ball beyond the keeper from about eight yards out.

Goal number three arrived in the 73rd minute, and it was the returning Parrott who finished with real style to hand Ireland a two-goal lead. 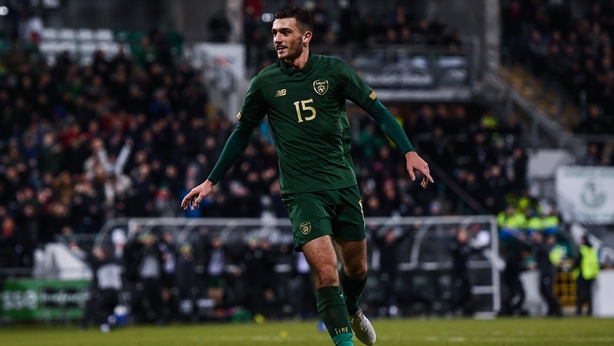 A quick ball out of defence found Ronan in midfield with time to turn and pick out the run of Parrott who had set off down the left.

The ball was inch perfect over the top into the path of the Spurs teenager, and while Parrott still had a lot to do, he made it look very straightforward as he picked his spot in the far corner, curling it beyond the keeper’s reach.

Elbouzedi then almost added a fourth as he was slipped through on goal in the 80th minute.

The Waterford winger’s shot squeezed under the keeper but popped up towards goal, allowing John Bjorkengren time to race back and head clear as the ball was dropping into the net.

Ireland kept pushing and a fine team move in the 84th minute led to another chance as Elbouzedi and Idah combined to set up Ronan for a clear shot at goal from the edge of the box.

The shot was hit with venom but lacked accuracy and the ball flew high and wide.

Parrott left to a standing ovation with four minutes to play, and the crowd were on their feet a minute later when Elbouzedi got the goal that his play deserved, as he was handed the simplest of tasks from three yards out following a clever run and square ball in from Ronan out on the left.

The victory leaves Stephen Kenny’s side three points clear of second-placed Italy, albeit with two more games played in what has become a two-horse race for automatic qualification for the 2021 tournament.