It's a game that will, in all honesty, quickly fade from memory but there were some eye-catching performances for the Republic of Ireland in their 3-1 victory over New Zealand at a sparsely attended Aviva Stadium.

Didn't have too much to do all night but acquitted himself well. Made a decent clearance punch in the middle of a first-half scramble and another good two-fisted stop just after the break. Could do nothing about the goal.

Played in Sean Maguire with a peach of a ball in the first half and had looked comfortable until Callum McCowatt’s 30th-minute goal, which came after the young Celtic full-back got sucked out of position. That’s a learning curve but O’Connor never dropped his head and he offered willing support to Robbie Brady on the overlap throughout, his endeavour climaxing in a wonderful cross for Callum Robinson's goal. An encouraging debut.

Dominated the isolated Chris Wood on what was overall a routine night but he’ll be annoyed at the All Whites goal, which caught the back four cold.

Ireland’s forgotten man was also largely redundant against the limited visitors but he marshalled things well and talked O'Connor through the game.

He got a lot of ball early on when much of the hosts’ play went down the left though he looked a little nervous, and was occasionally sloppy in possession. The Blackburn defender should have done better with an early chance from Browne’s low cross, albeit it fell to his weaker right foot. Made a crucial first-half interception to snuff out a rare All Whites attack and then planted an excellent header home to level it on the half-time whistle.

Has really benefited from his time under Lee Bowyer at Charlton - West Ham could well recall him from that loan move in January – and looks strong and confident. Efficient, intelligent and mobile, Glenn Whelan’s natural successor is also hardy, his small frame well able to soak up the hits when need be.

He was everywhere in the first 15 minutes, playing with an energy that was great to watch if impossible to sustain. Understandably dipped thereafter and dropped in and out of the game. It was telling that every time he came to life Ireland looked far more potent. Taken off on 63 minutes and though he won't start against the Danes he may well have done enough to be viewed as an ace up the sleeve.

Brilliantly teed up Williams in the 13th minute with a Cruyff turn and cross that the Blackburn defender steered well wide. Helped Ireland control midfield and exhibited his passing range during the home team's brighter spells. A confident showing.

Continues to have a bit of ring rust having played so little football the last year and looked a little over-eager at times but Brady is a class act and he dotted this with some moments of quality. He just needs minutes right now, and he'll have benefited from a good 90-minute blowout tonight. 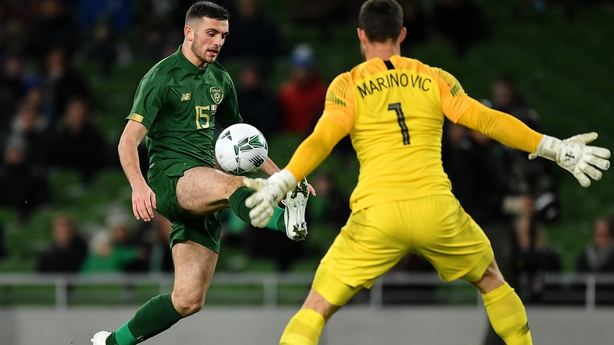 Ran himself into the ground. He was flagged offside five minutes in after darting on to a terrific Byrne ball, and nearly repaid the favour on 25 minutes when his cutback was taken off the Shamrock Rivers’ man’s toe. For a player of his age, his physicality was very impressive . He’ll be frustrated at his missed chance in the second half, when he drilled it into Marinovic’s body after holding his run well. Parrott is raw, but the talent is obvious.

You sensed this was a golden opportunity for the Preston striker to finally break his international duck – and he did so in style. Missed a really good chance in the 21st minute when he latched on to Lee O’Connor’s ball and then poked straight at visiting keeper Stefan Marinovic; he was unlucky seven minutes before the break with a glancing header that spun inches wide; but his pinged cracker 52 minutes in was worth the wait. The 25-year-old also unselfishly slipped in Parrott just before the hour mark when he could have gone for a second himself. A good outing.

Slotted in on the left side of defence without much fuss and got involved in the other third when he could.

Typically neat and tidy from Judge, who'll be disappointed not have gotten more of a spin.

Could have got on the scoresheet after his angled drive forced Marinovic into a smart stop but rectified that soon after with a diving header to convert O'Connor's wicked cross. A bright cameo.

Didn't look like he'd even have to warm his palms as he picked up a senior cap - until he made a razor-sharp left-handed save to deny Elliot Collier two minutes from time.

Played some cute passes as the game opened up in the final quarter.

Missed a great chance to get a second international goal, putting a shot too close to Marinovic while under pressure when he was clean through.

'Jack loves the club but the club loves Jack as well'

Anatomy of the perfect transfer saga