Virgil van Dijk has no regrets about how last season's Premier League title race panned out as he believes Liverpool learned enough from the experience for it to make a difference second time around.

Despite holding, albeit for just 24 hours, a 10-point lead last December and taking 31 points from a possible 33 in their final 11 matches of the campaign, the Reds lost out on a first championship since 1990 by one point after Manchester City rattled off 14 successive victories during the run-in.

Liverpool now have a nine-point advantage over City, who have dropped to fourth, and eight over Leicester and Chelsea.

Van Dijk refuses to countenance talk of coasting to the title but believes the memories of last season can help bring a better outcome.

"We took a lot of experience last year. Good things, but also some things we should have done better," he said.

"We did everything possible. We shouldn't have any regrets from last year.

"They (City) were just outstanding. We kept pushing them and they kept pushing us and you have to respect that, I certainly do.

"This year is a new chance for more teams, for both of us and the only focus is the game ahead of us.

"We have so many difficult periods of games with so many competitions, travelling and hopefully no injuries, no illness, so anything can happen.

"Hopefully we can only make sure we react better and do better. You need to have that bit of luck as well throughout the whole season so at the moment we are very happy in the situation." 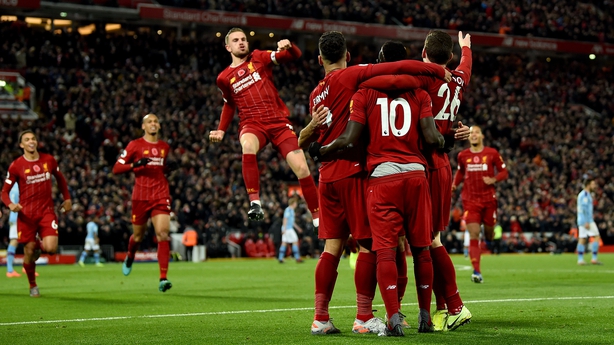 Liverpool have opened up an eight-point gap at the summit after taking 34 points from the first 36 available.

Only two other sides - Manchester United in 1993 and City in 2017 - have held similar Premier League advantages at this stage and both went on to win the title.

But with Leicester and Chelsea separating the two title favourites in the table has the race now become a four-horse race?

"I don't know. That is something for you guys to put out in the media," added the Holland captain.

"They have been doing very well and even if you look at Sheffield United, they are a very difficult team to beat.

"I know, everyone here as well knows as well, how difficult this year will be so we shouldn't look too much at other teams.

"I think it was very big to get the three points against the champions. Obviously, we are in a very good situation. That is something we can't deny.

"We all know the season is too long to properly celebrate that we are nine points ahead or something and we won't.

"The mentality we have is we just have to carry on and keep doing better."