The Merseysiders beat Manchester City 3-1 at Anfield on Sunday to go eight points clear at the top of the table, Fabinho, Mo Salah and Sadio Mane getting the goals in a pulsating clash.

Robertson and Alexander-Arnold were again supreme for Jurgen Klopp's side, and O'Shea - who won five league crowns at Old Trafford - was highly impressed.

"There's a little joke going around that they've got a better delivery than the Royal Mail!" he told RTÉ 2fm's Game On.

"The two of them are playing incredible. It's great to have that competition within the squad.

"To have your two full-backs fighting it out for assists and creating chances for your team, it shows how well the two of them are doing. It's great for Liverpool, but I don't think the league is done yet.

"They're in a very strong position but it's only mid November. There'll be plenty more twists and turns." 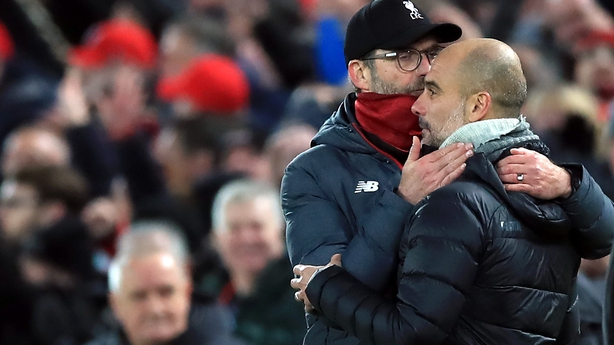 Pep Guardiola was furious when City were not awarded a penalty second before Liverpool's first goal, the ball appearing to hit Alexander-Arnold's hand.

His remonstrations on the touchline became even more theatrical after Raheem Sterling's cross struck Alexander-Arnold's arm in the second half, with referee Michael Oliver again waving away City's appeals.

"It's crucial (to get the first goal), " O'Shea said. "Liverpool had the momentum with that early goal, then you had City missing one or two of their key players at the back.

"The two managers do show their emotions. That's why I suppose they appeal so much to their own fans and to other football fans in general.

"Pep is doing it as well to shield the players from more criticism. Lots of managers do that to protect the players, to take the attention away from some of his tactics maybe that he thought he might have got wrong on the day. For me the first one, I've seen them given but the second one he was appealing for, no way was that a penalty."

O'Shea's old club United saw off Brighton 3-1 at Old Trafford to move up to seventh. The Waterford man hopes they're turning a corner.

"Martial coming back has made a big difference to the attack," he said. "Rashford becomes a different player. The defeat to Bournemouth was a blow, after they'd looked like they were going on a nice run. Brighton at home, you'd be thinking they should be getting the three points.

"They did, and they did clinically."