The Republic of Ireland will be hoping to make it three wins from three in their Euro 2021 qualifying campaign when they face a Greek odyssey in Athens on Tuesday afternoon.

Live blog on RTÉ.ie and the RTÉ News Now App from 12:45pm

Live on RTÉ2 and RTÉ Player

It will be 24°degrees in Athens, which is slightly different to Dublin.

There were goals, poor defending, chances created and a feel good factor at Tallaght Stadium.

Ireland pressed well throughout but also broke at pace when needed, with Katie McCabe’s individual skill key, as well as their use of the flanks.

The goals came from set-pieces and good wing play, all part of a thrilling game that over 5,000 Irish fans will remember fondly.

That match drew a huge TV audience in front of an expectant home support.

This is a contrast, on a Tuesday afternoon in Athens and likely in front of a crowd of a few hundred.

The Greeks got their qualification hopes back on train with a 4-0 victory over Montenegro in Podgorica and return home knowing this is a key game.

While the Ukraine game was a high point, the reality is Ireland need to keep it going if they are to take one of the three places for qualification through second place, or else it’s a play-off.

"We needed that win against Ukraine to have the chance to qualify, it was huge," said manager Pauw.

"But now we are in the situation where we cannot lose points, which is a different starting point."

That brings some interesting tactical questions. Ireland’s pace will be helpful and as basic as it may be, nicking a goal through McCabe’s dead balls could be a priority. The loss of Megan Campbell through concussion is a blow, with the infamous long-throw in mind.

We can confirm that Megan Campbell was left out of the Republic of Ireland's squad for their upcoming fixture against Greece next week as a precaution after suffering concussion against Birmingham City.

Along with that, another starter from the victory in Tallaght, Heather Payne, is forced to sit out, but that could give Leanne Kiernan more minutes.

It’s likely to be a tense encounter in the Greek capital and apart from the two enforced changes there may not be too many other alterations. 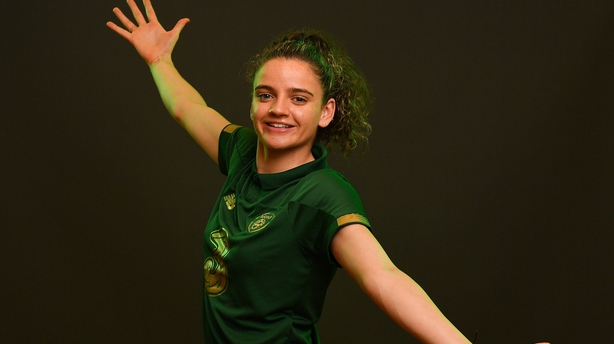 Shelbourne defender Jamie Finn admits it's difficult to force a way in the Ireland squad but that high standard is a good problem to have.

"It's going to be difficult, but I'm just going to take it day by day," she says.

"The girls played great (against Ukraine), and the crowd pushed them on a bit. It was great to see them all there.

"It's great to have someone like Vera Pauw coming in with her experience and coaching us. I think it can work going forward."

Tuesday's game will have a big say in deciding that.

Follow the Greece v Republic of Ireland on Tuesday via our live blog on RTÉ.ie/sport and the News Now app, or watch live and exclusive TV coverage on RTÉ2 and the RTÉ Player from 12:45pm