Red-hot Jamie Vardy piled the pressure on Arsenal boss Unai Emery as the Leicester striker continued to haunt the Gunners.

The forward scored his ninth goal in nine games against the Gunners to inspire the Foxes to a 2-0 win as they went second in the Premier League.

Vardy, the top flight's leading scorer, also set up James Maddison's clincher as Emery's side slumped to a limp defeat at the King Power Stadium.

Alexandre Lacazette wasted Arsenal's best chance and Pierre-Emerick Aubameyang had a goal disallowed but the visitors were poor.

The Gunners, winless in the Premier League for over a month, slipped eight points behind the top four with Emery's position under increasing scrutiny.

Trailing Leicester by six points before kick-off the Gunners desperately needed the win and Lacazette should have put them ahead after 14 minutes.

The hosts started brightly but Arsenal created the first opening when Hector Bellerin crossed for Aubameyang.

He failed to find the finish and the ball rolled for Lacazette, who could only fire wide from six yards.

It allowed the Gunners to briefly look dangerous and Lacazette's weak shot was gathered by Kasper Schmeichel.

They had contained any early Leicester threat but were guilty of poor distribution as Emery's men tried to play out from the back. 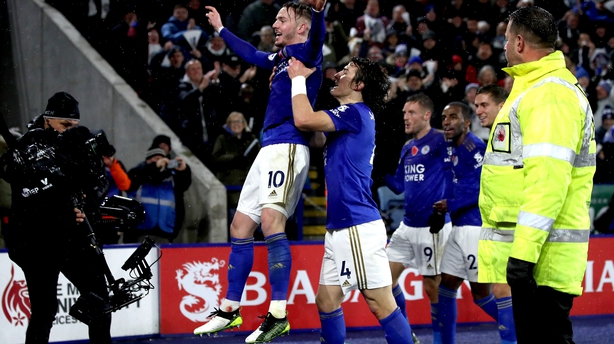 Sloppy passing continued to blight the Gunners and Bellerin, making his first Premier League start since January after injury, gifted the ball to Ayoze Perez to fire over.

Arsenal were there for the taking but the Foxes' lack of intensity aided the visitors.

Maddison's free-kick flew just over three minutes before the break and Harvey Barnes miscued a header.

Yet the hosts came closer four minutes into the second half after finally upping the tempo. Fine work from Ricardo Pereira saw him cross for Wilfred Ndidi but his 16-yard effort slammed off the bar.

Arsenal then thought they had opened the scoring after 55 minutes when Aubameyang converted Sead Kolasinac's cross, only for the striker to be correctly ruled offside.

But Leicester finally took control with 22 minutes left when Vardy continued his excellent record against the Gunners. A sweeping Leicester move ended with Youri Tielemans swapping passes with Barnes and Vardy found the corner from 12 yards for his eleventh Premier League goal of the season.

Pereira fed Vardy and he teed up Maddison to drill in a fine low effort from the edge of the box.