Republic of Ireland international Ciaran Clark scored what proved to be the winning goal as Newcastle United recovered from a goal down to beat Bournemouth 2-1 at St James's Park.

Clark, named in Mick McCarthy's squad for the upcoming firndly against New Zealand and subsequent Euro 2020 qualifier against Denmark, struck in the 52nd minute and help secure back-to-back victories in this season's Premier League.

Bournemouth went ahead in the 14th minute with a brilliantly-worked corner as Harry Wilson made a looping run from the back post before hammering an unstoppable shot low to the keeper's right.

Newcastle lost their captain and defensive lynchpin Jamaal Lascelles to injury shortly afterwards, but the home side began to create decent chances as they battled their way back into the game.

Still yet to score for Newcastle, winger Allan Saint-Maximin hit the crossbar before his side levelled when his next shot was deflected into the path of DeAndre Yedlin, who came steaming in at the far post to head home just before the break.

Better known for his heading prowess, Clark let his feet do the talking seven minutes into the second half as he scuffed the ball home for his second goal in two games to put his side ahead.

Newcastle weathered a late storm to hang on for a win that lifts them to 11th place in the table on 15 points after 12 games, while Bournemouth are a point ahead of them in 12th position.

Tottenham produced yet another limp Premier League display as they stumbled to a 1-1 draw with Sheffield United that was marred by more VAR drama where David McGoldrick saw a goal chalked off.

The Blades began with Irish internationals Enda Stevens, John Egan and McGoldrick in their starting team and will feel they could well have taken all three points against the Londoners.

Spurs have endured a miserable start to their league campaign – just two points from a possible 12 -  and it could have been worse, forced to ride their luck at different stages and were inches from falling behind six minutes after the start of the second half.

Lys Mousset wriggled free in the penalty area and sent a shot that left most people in the stadium waiting for the net to bulge but drifted just wide.

That miss proved pivotal as six minutes later Spurs were in front, though there was a large amount of fortune attached to it.

Ireland full-back Enda Stevens inexplicably played a loose ball in own area that went straight to Son and the South Korean's deflected shot went through the legs of Dean Henderson. 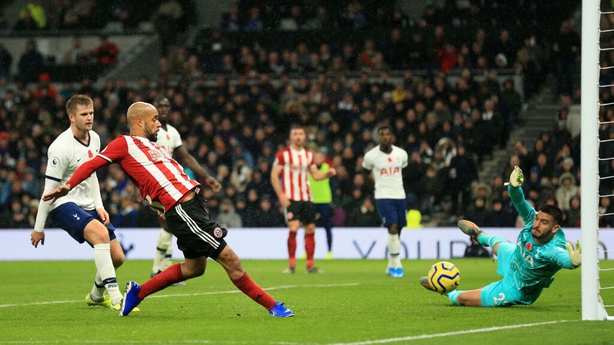 Just 129 seconds later, though, Sheffield United were celebrating an equaliser as David McGoldrick converted Stevens' cross at the far post.

However, after a painstaking check at Stockley Park that lasted longer than the time between the two goals, Lundstram's toe was ruled offside.

George Baldock's 78th-minute strike was the second time United had got the ball in the back of the net, but VAR scrubbed off the first after John Lundstram's toe was ruled to be offside after a lengthy decision-making process.

It would not have been unjust if Chris Wilder's men - still unbeaten away from home this term - had left the Tottenham Hotspur Stadium with all three points as they created the better chances.

Goals from Tom Davies and Richarlison gave Everton their first away win of the season at Southampton on Saturday, taking some pressure off Toffees manager Marco Silva but putting more of it on his opposite number Ralph Hasenhuttl.

The visitors took the lead in the fourth minute when the unmarked Davies headed in a corner kick for his first goal since May 2018 - which also came against the Saints. 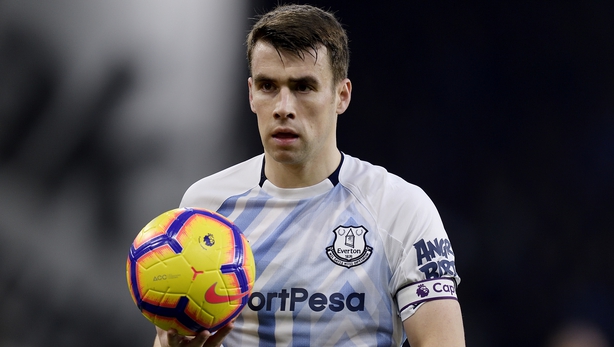 Republic of Ireland and Everton captain Seamus Coleman once again had to be content with a place on the bench, with Djibril Sidibe playing the full 90 minutes, while for the Saints, Michael Obafemi replaced Stuart Armstrong up front in injury-time.

Everton created the most chances in the first half, while the home side failed to muster a single shot on goal, leading to boos and jeers at the halftime whistle.

The Saints were quick off the blocks in the second half, and the pressure paid off when halftime substitute Sofiane Boufal beat his marker on the right and squared the ball for Danny Ings to tap in from close range.

But with 15 minutes to go, Djibril Sidibe sent in a pin-point cross to the far post where Richarlison made it 2-1 with a left-footed first-time finish for his first goal in eight league matches.

Everton move up to 13th in the table on 14 points while Southampton remain in the drop zone, in 19th place on eight points.

West Ham United's winless streak extended to six games as they suffered a 3-0 defeat to a Burnley side inspired by talented teenage winger Dwight McNeil.

Burnley, who had lost their last three games, went ahead in the 11th minute when McNeil swung in a deep corner, James Tarkowski snuck round the back and headed to Ashley Barnes who poked home. 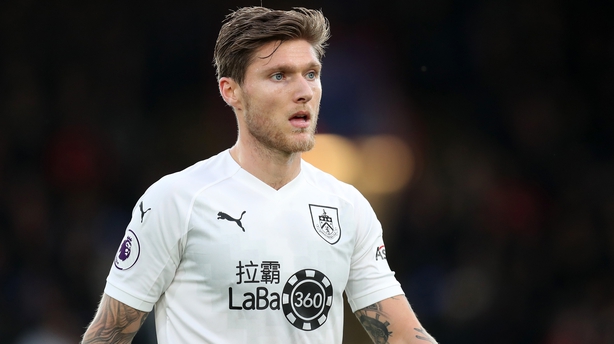 From an Irish perspective, Jeff Hendrick played the full 90 minutes of the contest, while Robbie Brady was introduced with the clock in the red. Kevin Long was an unused substitute.

The Clarets thought they had a second in the 36th minute when McNeil whipped in a superb cross which Chris Wood met with a thundering header but to the anger of the home crowd, the VAR review found evidence of off-side.

Burnley did double their lead, a minute before the break, and it was no surprise that McNeil was again the provider.

A throw out from West Ham's shaky Spanish keeper Roberto Jimenez to defender Fabian Balbuena was intercepted by the Burnley winger who burst forward before delivering a low cross which was expertly turned in by Wood.

Jimenez was at fault again for the third in the 54th minute, flapping at an Ashley Westwood corner which he managed to punch into his own net.

But the Spanish keeper did well to ensure that Burnley did not add to the punishment with a series of fine saves as Sean Dyche's side threatened to run rampage.