Kyle Walker struck a late winner as champions Manchester City came from behind to snatch a hard-fought win over Southampton in the Premier League.

City were stunned when Saints, thrashed 9-0 by Leicester in their last league outing, grabbed an early lead through James Ward-Prowse.

Despite near relentless pressure, the visitors repelled City time after time until Sergio Aguero finally equalised 20 minutes from time.

City kept up the tempo and Walker secured victory in the 86th minutes after Saints goalkeeper Alex McCarthy, brought in for Angus Gunn following the Leicester humbling, failed to claim an Angelino cross.

City had to dig deep for their victory against opponents with a point to prove, but it was one they ultimately deserved.

The hosts threw much at the visitors but could not find a way through with Jack Stephens' early block on a Kevin De Bruyne shot a sign of things to come.

City were stunned as Southampton broke forward in the 13th minute and Stuart Armstrong tried his luck from distance.

Ederson seemed to be taken by surprise and spilled the low shot, offering a close-range opportunity for Ward-Prowse to snaffle up.

City rallied and pushed and probed at the Saints box with regularity, yet their every attempt to create an opening was pushed back. 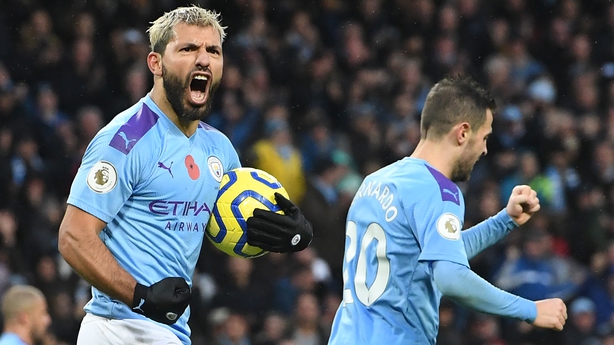 Ilkay Gundogan had a couple of shots blocked, a David Silva volley was also kept out by a defender and numerous crosses were cleared. John Stones also headed over from a corner.

City were almost caught out again by another counter-attack before the break but this time Ederson saved comfortably from Danny Ings.

Gabriel Jesus, who was stripped and ready to play before the interval, was sent on as Guardiola tried to crank up the pressure in the second half.

City played 4-2-4 when in possession but still struggled to find a way through as Southampton continued to pack their own box.

Such was Guardiola's frustration he sprinted down the touchline to gather the ball ahead of a ball boy in an attempt to speed things up.

Yet still more crosses were cleared and Gundogan had another attempt deflected wide and Sergio Aguero put a free header over from eight yards. 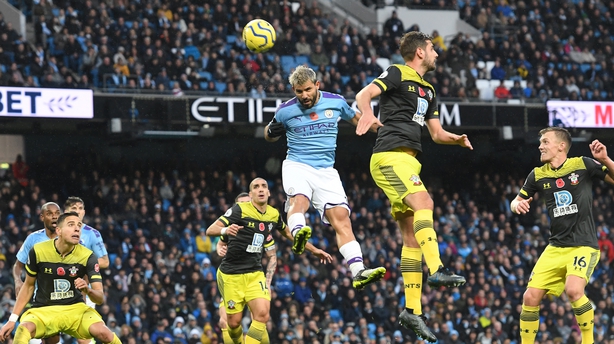 Pressure eventually had to to tell and Aguero made no mistake when presented with another chance in the 70th minute, firing Walker's cut-back through McCarthy's legs.

City almost went ahead in near identical circumstances when Raheem Sterling pulled back from the byline but this time McCarthy pushed over Bernardo Silva's powerful strike.

McCarthy almost cost his side 10 minutes from time when he picked up a backpass but De Bruyne curled the resulting free-kick wide.

Aguero had another chance when he turned in side the area but his effort was deflected wide and Gundogan was similarly frustrated.

Yet City were not to be denied and Walker popped up in the right place as McCarthy failed to push away a cross from the left.