The Donegal side came into Friday's night's tie at Finn Park a goal down to Drogheda United but came out with a 2-1 aggregate win after extra-time in their promotion / relegation play-off.

"We don’t get carried away too much, we don’t show our feelings, certainly I don’t.

"What we achieved out there outweighs either of the promotions I’ve been involved in.

"It’s a much more difficult avenue to go through. I think our lads grew up out there tonight and they deserve a huge amount of credit.

"We've bucked the trend of the Premier Division team going down." 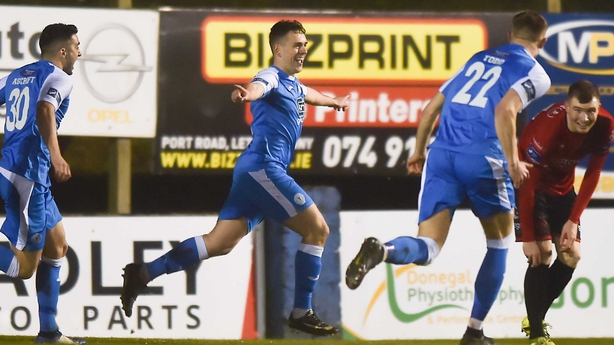 The manager also sounded a word of warning and appealed for financial help for the next season.

He added: "I've said this before when we got promoted a year ago. Unless we can kick on off the pitch we won’t be able to kick on on the pitch.

"That’s not a criticism of anyone around here, there are some brilliant people around here.

"But if they want us to be a Premier Division side they’ve got to back us or if there’s someone out there that wants to invest in a group of young lads that gave their all.

"Unless we can invest money we are going to be, at best, in the exact same position as we were tonight but more than likely we’ll go back down."

He also had sympathy for the visitors who have to wait at least another year to reach the top flight.

"We've got to give huge respect to Drogheda," he said.

"The manner and the sporting nature they accepted defeat and congratulated us is second to none and they are an example to all of us."