Gareth Bale is back in training but will once again be missing from the Real Madrid squad to face Real Betis.

The Wales forward, constantly linked with a move away from the Bernabeu, is still building up his fitness following injury, according to manager Zinedine Zidane.

Bale, 30, flew to England earlier this week fuelling more speculation that he could leave in January.

Zidane said at his pre-match press conference: "It's old news. He's here and back out on the pitch working to get fit again.

"We're behind him, trying to get him back with the team as soon as possible. He's here with us and back training.

"He's back from his trip and is much better, but he's still not available for selection. He looks in good shape to me." 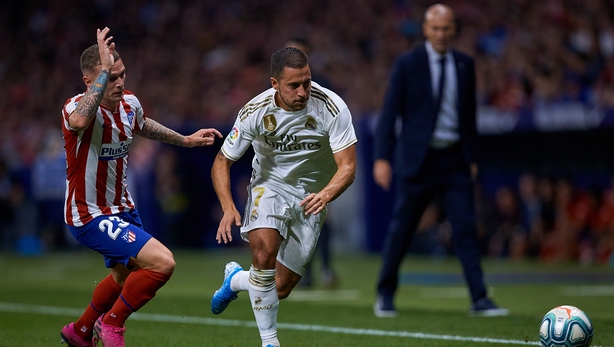 Zidane admits he wants more goals from Eden Hazard, but has urged everybody to be patient with the former Chelsea star.

Hazard, who missed the start of the season through injury, has scored only once in eight games since his big-money move from Stamford Bridge in the summer.

"We can all see he's playing better," said Zidane. "Perhaps he could score a bit more often but we're not concerned.

"We're happy with what he's doing on the pitch and he's getting better every day.

"Players of his quality can see things that others simply aren't capable of seeing.

"I don't think he's been timid, quite the opposite. Everyone wants to see him get better and I think he's improving every day. We'll all be happy with him but we have to take it easy."

Real Madrid, who head into the weekend a point behind leaders Barcelona, face 16th-placed Betis on Saturday night.

"Every team comes here to play and get a result. That's to be expected," added Zidane.

"We try and put in a good performance every time we play and try to keep a clean sheet.

"That's important to us and tomorrow we've got another chance to put on a good display at home and in front of our fans to pick up three more points."